Current paradigms of peripheral B cell selection suggest that autoreactive B cells are controlled by clonal deletion, anergy, and developmental arrest. We report that changes to the human antibody repertoire likely resulting from these mechanisms both for a well-characterized autoreactivity from antibodies encoded by the VH4-34 gene and for other hallmarks of an autoreactive repertoire are apparent mainly for class-switched B cells and not for IgM germinal center, IgM memory, or IgM plasma cells. Other possible indicators of autoreactivity found selected with immunoglobulin class include JH6 gene segment usage, increased frequency of B cells with long third hypervariable regions, and distal Jκ gene segment bias. Of particular interest is the finding that B cells with these same characteristics are selected into the lineage of B cells that have undergone the unusual class switch from constant region Cμ to Cδ (Cδ-CS). The Cδ-CS population also displays an increased frequency of charged amino acids localized to the complementarity-determining regions, further suggesting autoreactivity, and evidence is presented that these B cells had undergone extensive receptor editing. Thus, the Cδ-CS lineage may be a “sink” for B cells harboring autoreactive specificities in normal humans. A model for a new tolerizing mechanism that could account for the Cδ-CS lineage is presented. 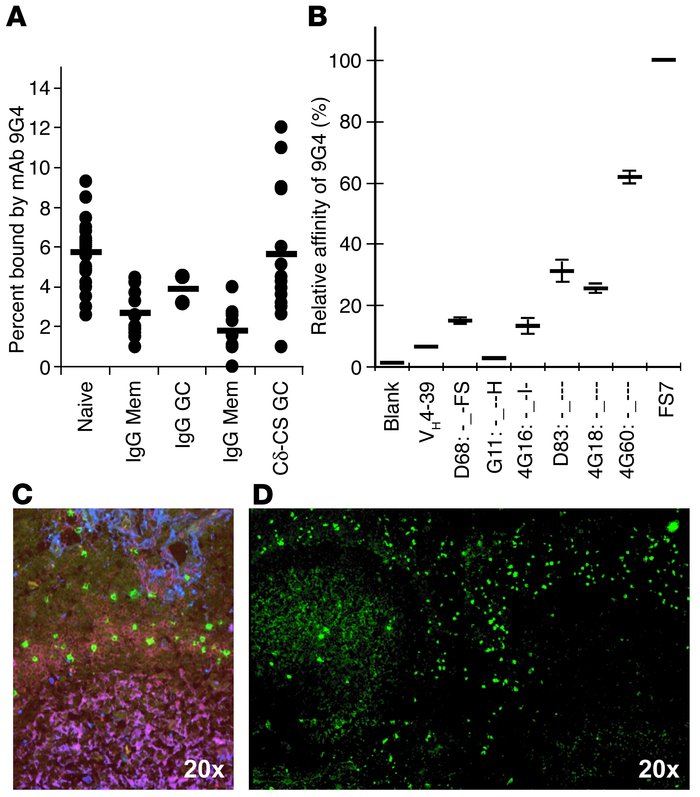 Immunohistochemical and cytometric analysis of VH4-34+ antibody expression. (A) Cytometric analysis to determine the percentage of naive (24 donors), IgM+ GC (2 donors), IgM+ memory (Mem) cells (11 donors), IgG+ memory cells (12 donors), and Cδ-CS GC cells (14 donors) utilizing VH4-34 (mAb 9G4+). Bars indicate mean. (B) Detection of VH4-34–encoded antibodies by 9G4 is inhibited by somatic hypermutation. Relative binding by 9G4 was compared by ELISA for an unmutated VH4-34–encoded antibody (FS7) plus six VH4-34–encoded heavy chains harboring somatic mutations and a non–VH4-34 control antibody (VH4-39). Dashes adjacent to the clone names indicate mutations to the 9G4 mAb epitope at amino acids W7, A23, V24, and Y25, and replacements are indicated by single-digit amino acid code. The mean and SD of three assays are indicated. (C) Micrograph of a human tonsil section stained with anti-IgM (red), anti-IgG (blue), and anti-VH4-34 (9G4 mAb, green). The field is bisected by a follicular mantle (naive B cells) surrounding a GC at the bottom. Individual naive cells were scored for frequency of VH4-34 usage from 4 donors (7% ± 1% SD were VH4-34+). (D) Micrograph of a tonsil section stained with 9G4 mAb (anti–VH4-34, green). Two GCs are evident from the mantles of 9G4+ stained naive cells. The GC on the left is made up of an oligoclonal expansion of VH4-34-utilizing (9G4+) cells with 9G4bright plasmablasts differentiating within the GC proper, indicating that VH4-34+ B cells can contribute to immune reactions. The GC on the right is 9G4–.