Cerebellar ataxia, a devastating neurological disease, may be initiated by hyperexcitability of deep cerebellar nuclei (DCN) secondary to loss of inhibitory input from Purkinje neurons that frequently degenerate in this disease. This mechanism predicts that intrinsic DCN hyperexcitability would cause ataxia in the absence of upstream Purkinje degeneration. We report the generation of a transgenic (Tg) model that supports this mechanism of disease initiation. Small-conductance calcium-activated potassium (SK) channels, regulators of firing frequency, were silenced in the CNS of Tg mice with the dominant-inhibitory construct SK3-1B-GFP. Transgene expression was restricted to the DCN within the cerebellum and was detectable beginning on postnatal day 10, concomitant with the onset of cerebellar ataxia. Neurodegeneration was not evident up to the sixth month of age. Recordings from Tg DCN neurons revealed loss of the apamin-sensitive after-hyperpolarization current (IAHP) and increased spontaneous firing through SK channel suppression, indicative of DCN hyperexcitability. Spike duration and other electrogenic conductance were unaffected. Thus, a purely electrical alteration is sufficient to cause cerebellar ataxia, and SK openers such as the neuroprotective agent riluzole may reduce neuronal hyperexcitability and have therapeutic value. This dominant-inhibitory strategy may help define the in vivo role of SK channels in other neuronal pathways. 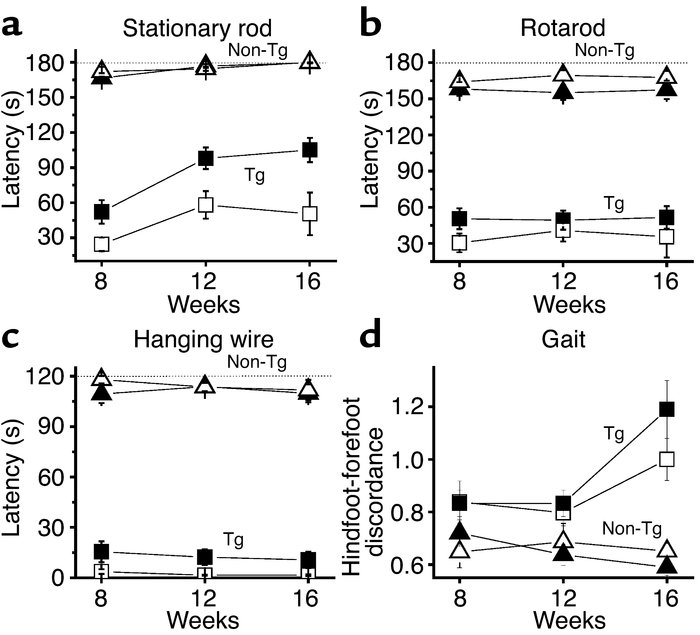