Neural stem/progenitor cell (NSPC) migration toward sites of damaged central nervous system (CNS) tissue may represent an adaptive response for the purpose of limiting and/or repairing damage. Little is known of the mechanisms responsible for this migratory response. We constructed a cDNA library of injured mouse forebrain using subtractive suppression hybridization (SSH) to identify genes that were selectively upregulated in the injured hemisphere. We demonstrate that stem cell factor (SCF) mRNA and protein are highly induced in neurons within the zone of injured brain. Additionally, the SCF receptor c-kit is expressed on NSPCs in vitro and in vivo. Finally, we demonstrate that recombinant SCF induces potent NSPC migration in vitro and in vivo through the activation of c-kit on NSPCs. These data suggest that the SCF/c-kit pathway is involved in the migration of NSPCs to sites of brain injury and that SCF may prove useful for inducing progenitor cell recruitment to specific areas of the CNS for cell-based therapeutic strategies. 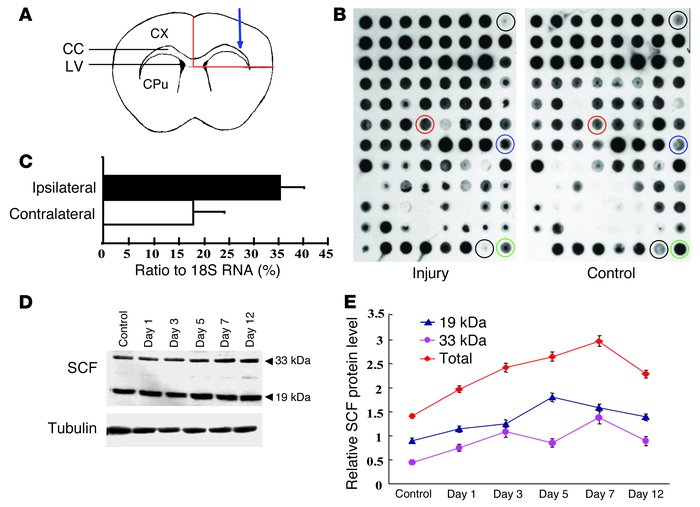 SCF induced by “freeze” injury to the brain. () Schematic illustration of “freeze” injury. Blue arrow indicates the insertion track of the precooled needle. Red lines separate the forebrain into injured and uninjured hemispheres and divide the hemispheres into its dorsal and ventral halves. CX, cortex; CPu, caudate putamen (striatum); CC, corpus callosum; LV, lateral ventricle. () Custom microarray confirms increased message in the injured brain at day 5. The cDNA clones from SSH library were loaded individually onto duplicate nitrocellulose filters, one hybridized by the injured brain_derived cDNAs (Injury) and another hybridized by contralateral control (Control). Membranes with the gene are shown, and the spots are marked with red and blue circles. and are shown as green and black circles, respectively. SCF images are stronger in the injured brain_derived cDNA_hybridized blot than the control. () Quantitative RT-PCR. Fold induction of mRNA in “freeze”-injured forebrain 5 days after injury compared with the uninjured contralateral side ( < 0.05). The mRNAs were individually normalized to levels of 18S RNA. () Time-dependent changes in SCF protein induction after “freeze” brain injury, as measured by Western blot, using uninjured forebrain as a control. Two major bands were present, representing the transmembrane form of SCF (33 kDa) and the cleaved, soluble form of SCF (19 kDa). () Quantification of SCF expression by computer densitometry. The band intensities of SCF were normalized to those of β-tubulin.