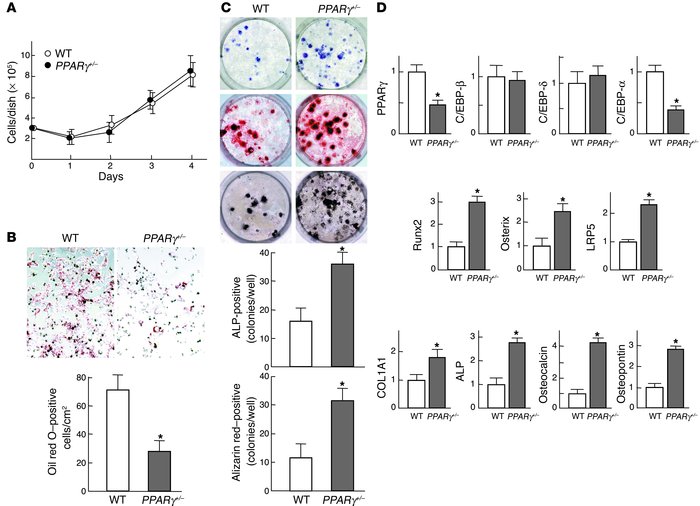 Adipogenesis and osteogenesis in the cultures of bone marrow cells from +/– and WT littermates. (A) Growth curves of bone marrow cells isolated from +/– and WT mice. The adherent bone marrow cells were inoculated at a density of 3 × 105 cells/dish in 10-cm culture dishes. The cells per dish were counted at 1, 2, 3, and 4 days of culture. Data are expressed as means (symbols) ± SEMs (error bars) for eight dishes per group. (B) Adipogenesis determined by oil red O staining in the culture of bone marrow cells in α-MEM/10% FBS with troglitazone. The graph indicates the number of positive cells per square centimeter. (C) Osteogenesis determined by ALP (upper row), Alizarin red (middle row), and von Kossa (lower row) stainings in the culture of bone marrow cells in α-MEM/10% FBS with ascorbic acid and β-glycerophosphate. The graphs below indicate the number of ALP-positive (upper) and Alizarin red–positive (lower) colonies per well. Data are expressed as means (bars) ± SEMs (error bars) for eight wells per group (B and C). *Significant difference from the WT culture, < 0.01. (D) Expression of key molecules for adipogenesis (PPARγ, C/EBP-β, C/EBP-δ, and C/EBP-α) and osteogenesis (Runx2, osterix, and LRP5), and marker proteins for osteogenesis (COL1A1, ALP, osteocalcin, and osteopontin) determined by quantitative RT-PCR in the bone marrow cells at 14 days of culture under the conditions above. The ordinate axis indicates the relative amount of mRNA as compared with that of WT.