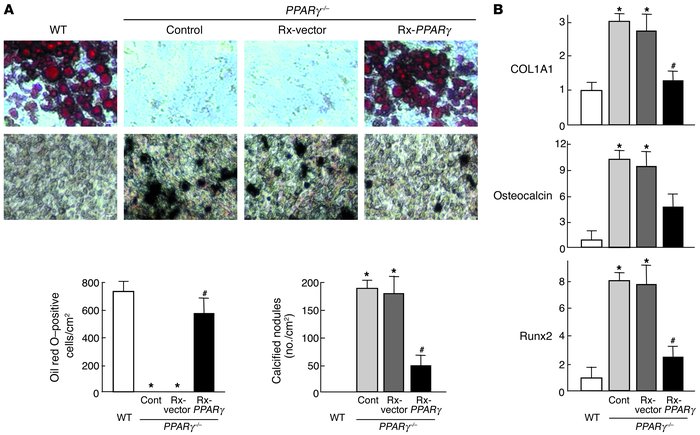 Adipogenesis and osteogenesis in the mouse ES cell cultures of homozygous -deficient (–/–) and WT genotypes. As a rescue experiment, PPARγ was reintroduced into –/– ES cells using a retrovirus vector carrying the gene (Rx-) or the same retrovirus vector without the gene (Rx-vector) as a control. (A) The upper row shows the adipogenesis determined by the oil red O staining of the ES cell culture in DMEM/10% FBS with troglitazone. The number of oil red O–positive cells stained in red was counted and shown in the left graph as the cells per square centimeter. The images in the lower row indicate the osteogenesis determined by the von Kossa staining of the ES cell culture in DMEM/10% FBS without any osteogenic supplements. The number of von Kossa–positive calcified nodules stained in black was counted and shown in the right graph as the number per square centimeter. Scale bar: 20 μm. (B) Relative mRNA levels of the marker genes for osteoblasts — COL1A1, osteocalcin and Runx2 — determined by real-time quantitative RT-PCR 10 days after the embryoid bodies were transferred to a gelatinized six-multiwell plate in DMEM/10% FBS without any osteogenic supplements. The ordinate axis indicates the relative amount of mRNA as compared with that of WT. Data are expressed as means (bars) ± SEMs (error bars) for eight wells per group. *Significant difference from the WT culture, < 0.01. #Significant restoration by Rx- as compared with the control –/– and –/– plus Rx-vector cultures; < 0.01. Cont, control.