Big mitogen-activated protein kinase 1 (BMK1), also known as ERK5, is a member of the MAPK family. Genetic ablation of BMK1 in mice leads to embryonic lethality, precluding the exploration of pathophysiological roles of BMK1 in adult mice. We generated a BMK1 conditional mutation in mice in which disruption of the BMK1 gene is under the control of the inducible Mx1-Cre transgene. Ablation of BMK1 in adult mice led to lethality within 2–4 weeks after the induction of Cre recombinase. Physiological analysis showed that the blood vessels became abnormally leaky after deletion of the BMK1 gene. Histological analysis revealed that, after BMK1 ablation, hemorrhages occurred in multiple organs in which endothelial cells lining the blood vessels became round, irregularly aligned, and, eventually, apoptotic. In vitro removal of BMK1 protein also led to the death of endothelial cells partially due to the deregulation of transcriptional factor MEF2C, which is a direct substrate of BMK1. Additionally, endothelial-specific BMK1-KO leads to cardiovascular defects identical to that of global BMK1-KO mutants, whereas, surprisingly, mice lacking BMK1 in cardiomyocytes developed to term without any apparent defects. Taken together, the data provide direct genetic evidence that the BMK1 pathway is critical for endothelial function and for maintaining blood vessel integrity. 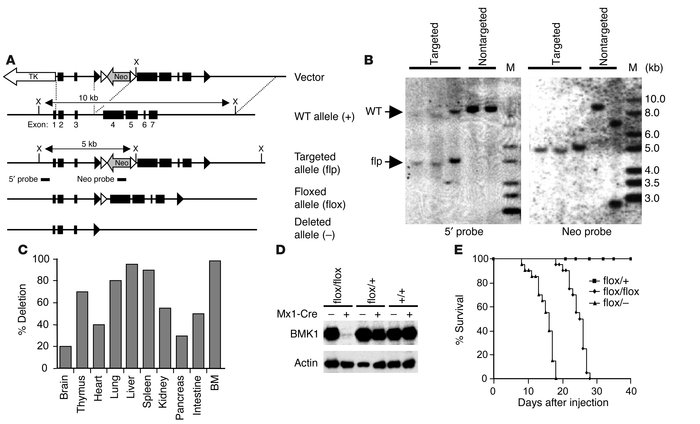 Conditional gene targeting of the gene. (A) Diagram of the WT genomic locus (+), the targeted allele (flp), the floxed allele (flox), and the null allele (–). Open and closed arrowheads indicate FRT and loxP sites, respectively. (B) Southern blot analysis of targeted ES cell clones. DNAs were digested with XhoI and hybridized with external 5′ probe or internal Neo probe. M, marker. (C) Efficiency of Mx1-Cre–mediated deletion in various organs. Hybridization signals from Southern blot analysis were quantified, and the deletion efficiency was calculated as the percentage of signals of deleted alleles in the total signals. BM, bone marrow. (D) Immunoblot analysis of BMK1 protein in the livers from pIpC-treated , , and mice carrying or not carrying the Mx1-Cre transgene as indicated. (E) Mortality of BMK1-CKO mice after pIpC treatment: = 12 for mice; = 20 for mice; = 20 for mice.