While much experimental data shows that vaccination efficiently inhibits a subsequent challenge by a transplantable tumor, its ability to inhibit the progress of autochthonous preneoplastic lesions is virtually unknown. In this article, we show that a combined DNA and cell vaccine persistently inhibits such lesions in a murine HER-2/neu mammary carcinogenesis model. At 10 weeks of age, all of the ten mammary gland samples from HER-2/neu–transgenic mice displayed foci of hyperplasia that progressed to invasive tumors. Vaccination with plasmids coding for the transmembrane and extracellular domain of rat p185neu followed by a boost with rp185neu+ allogeneic cells secreting IFN-γ kept 48% of mice tumor free. At 22 weeks, their mammary glands were indistinguishable from those of 10-week-old untreated mice. Furthermore, the transcription patterns of the two sets of glands coincided. Of the 12,000 genes analyzed, 17 were differentially expressed and related to the antibody response. The use of B cell knockout mice as well as the concordance of morphologic and gene expression data demonstrated that the Ab response is the main mechanism facilitating tumor growth arrest. This finding suggests that a new way can be found to secure the immunologic control of the progression of HER-2/neu preneoplastic lesions. 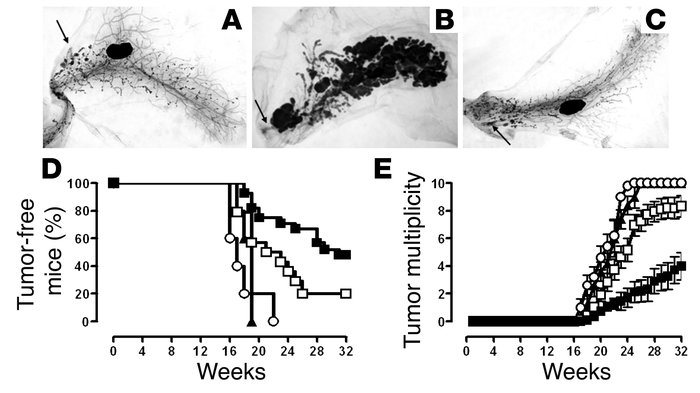