Recent evidence indicates that vascular progenitor cells may be the source of smooth muscle cells (SMCs) that accumulate in atherosclerotic lesions, but the origin of these progenitor cells is unknown. To explore the possibility of vascular progenitor cells existing in adults, a variety of tissues from ApoE-deficient mice were extensively examined. Immunohistochemical staining revealed that the adventitia in aortic roots harbored large numbers of cells having stem cell markers, e.g., Sca-1+ (21%), c-kit+ (9%), CD34+ (15%), and Flk1+ cells (4%), but not SSEA-1+ embryonic stem cells. Explanted cultures of adventitial tissues using stem cell medium displayed a heterogeneous outgrowth, for example, islands of round-shaped cells surrounded by fibroblast-like cell monolayers. Isolated Sca-1+ cells were able to differentiate into SMCs in response to PDGF-BB stimulation in vitro. When Sca-1+ cells carrying the LacZ gene were transferred to the adventitial side of vein grafts in ApoE-deficient mice, β-gal+ cells were found in atherosclerotic lesions of the intima, and these cells enhanced the development of the lesions. Thus, a large population of vascular progenitor cells existing in the adventitia can differentiate into SMCs that contribute to atherosclerosis. Our findings indicate that ex vivo expansion of these progenitor cells may have implications for cellular, genetic, and tissue engineering approaches to vascular disease. 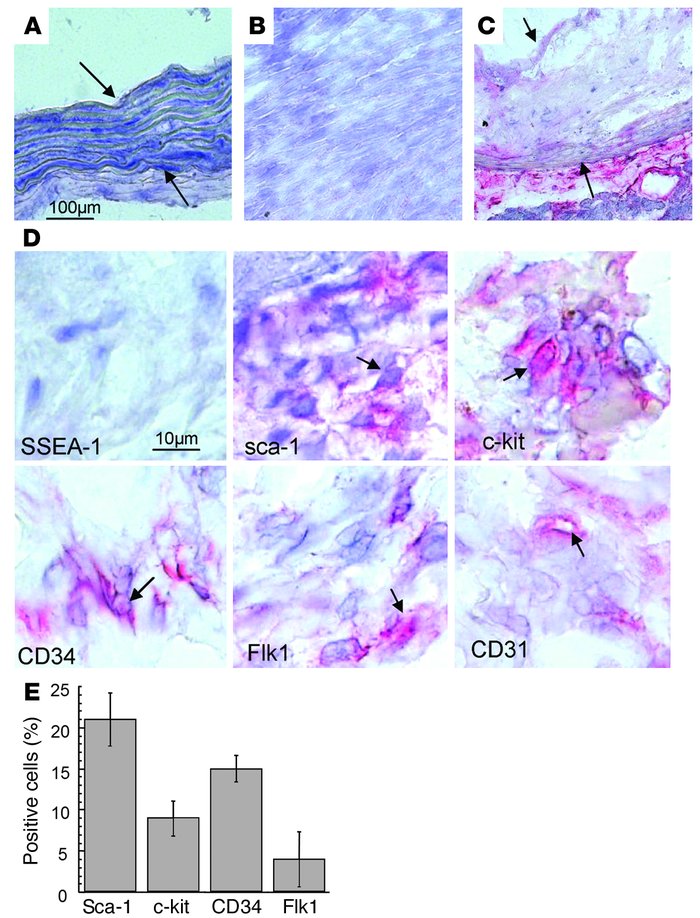 Immunohistochemical staining. Aortic roots from ApoE_/_ mice were sectioned and labeled with a variety of antibodies as indicated. Sections were developed with alkaline phosphatase anti-alkaline phosphatase (APAAP) techniques and counterstained with hematoxylin (blue). Total cells and positive cells were counted under the microscope. Arrows indicate intima and media ( and ) or examples of positive cells (, red). () The aortic wall. () A heart section. () The aortic root region. _ were labeled with Sca-1 antibody and photographed at lower magnification. () Sections from aortic root regions at a higher magnification. () The graph shows data of means (± SEM) from eight animals per group.