One of the most perplexing questions in clinical genetics is why patients with identical gene mutations oftentimes exhibit radically different clinical features. This inconsistency between genotype and phenotype is illustrated in the malformation spectrum of holoprosencephaly (HPE). Family members carrying identical mutations in sonic hedgehog (SHH) can exhibit a variety of facial features ranging from cyclopia to subtle midline asymmetries. Such intrafamilial variability may arise from environmental factors acting in conjunction with gene mutations that collectively reduce SHH activity below a critical threshold. We undertook a series of experiments to test the hypothesis that modifying the activity of the SHH signaling pathway at discrete periods of embryonic development could account for the phenotypic spectrum of HPE. Exposing avian embryos to cyclopamine during critical periods of craniofacial development recreated a continuum of HPE-related defects. The craniofacial malformations included hypotelorism, midfacial hypoplasia, and facial clefting and were not the result of excessive crest cell apoptosis. Rather, they resulted from molecular reprogramming of an organizing center whose activity controls outgrowth and patterning of the mid and upper face. Collectively, these data reveal one mechanism by which the variable expressivity of a disorder such as HPE can be produced through temporal disruption of a single molecular pathway. 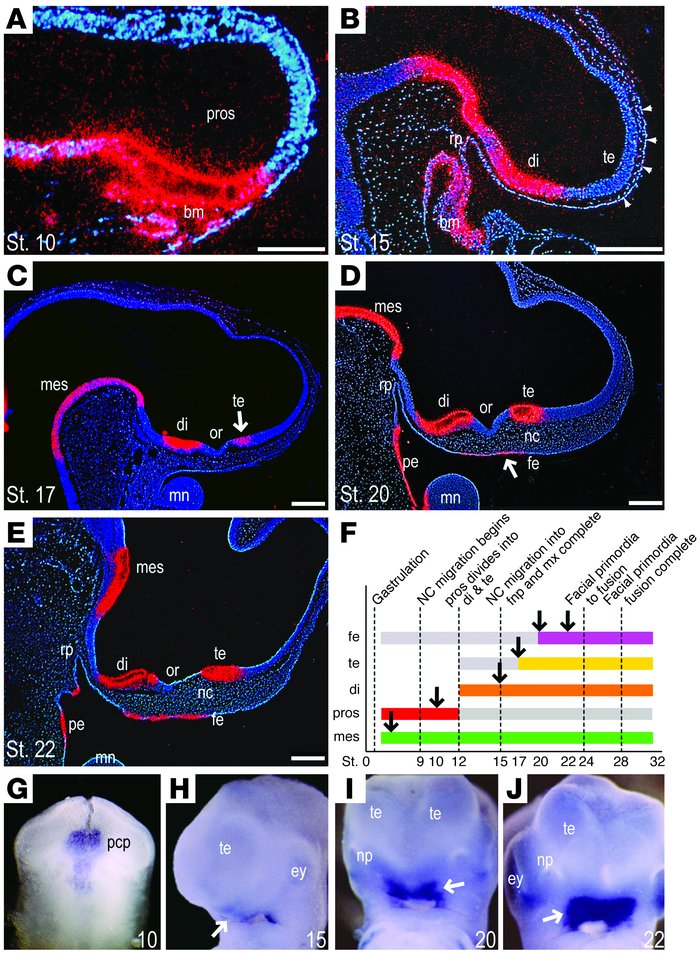 Ontogeny of expression in the craniofacial primordia. () At St. 10, is expressed in the prosencephalon (pros) and in oral ectoderm and pharyngeal endoderm comprising the buccopharyngeal membrane (bm). () By St. 15 the prosencephalon has separated into the telencephalon (te) and the diencephalon (di), where transcripts are localized. Neural crest cells have migrated as far as the dorsal aspect of the frontonasal primordium (arrowheads). rp, Rathke’s pouch. () At St. 17, is induced in a new domain within the ventral telencephalon (arrow). mn, mandible; mes, mesencephalon; or, optic recess. () At St. 20, is induced in a second new domain, ventral facial ectoderm (fe, arrow), which is separated from the telencephalon by intervening frontonasal neural crest (nc). The pharyngeal endodermal (pe) domain of , first evident at St. 10, persists through embryogenesis. () These domains are preserved from St. 20 onward. () Illustration of the sequential induction of relative to craniofacial development and to age. The time points of cyclopamine administration are indicated by arrows and correspond to the stepwise induction of in the craniofacial primordia. The units of measurement on the axis correspond to Hamburger-Hamilton stages of avian development and span a period of approximately seven days. fnp, frontonasal process; mx, maxillary process. () Whole-mount in situ hybridization analyses at St. 10 show transcripts in the medial prechordal plate (pcp), which will contribute to the ventral neural tube after neurulation. () transcripts in the diencephalon are barely discernible through the facial ectoderm at St. 15 (arrow). ey, eye. () By St. 20, is strongly expressed throughout the ectoderm of the stomodeum (arrow) and the maxillary primordia (), which persists at St. 22. Scale bars: 100 μm (); 200 μm (–).