Accelerated atherosclerosis is a major cause of morbidity and death in insulin-resistant states such as obesity and the metabolic syndrome, but the underlying mechanisms are poorly understood. We show that macrophages from obese (ob/ob) mice have increased binding and uptake of oxidized LDL, in part due to a post-transcriptional increase in CD36 protein. Macrophages from ob/ob mice are also insulin resistant, as shown by reduced expression and signaling of insulin receptors. Three lines of evidence indicate that the increase in CD36 is caused by defective insulin signaling: (a) Treatment of wild-type macrophages with LY294002, an inhibitor of insulin signaling via PI3K, results in an increase in CD36; (b) insulin receptor knockout macrophages show a post-transcriptional increase in CD36 protein; and (c) administration of thiazolidinediones to intact ob/ob mice and ob/ob, LDL receptor–deficient mice results in a reversal of macrophage insulin receptor defects and decreases CD36 protein. The last finding contrasts with the increase in CD36 that results from treatment of macrophages with these drugs ex vivo. The results suggest that defective macrophage insulin signaling predisposes to foam cell formation and atherosclerosis in insulin-resistant states and that this is reversed in vivo by treatment with PPAR-γ activators. 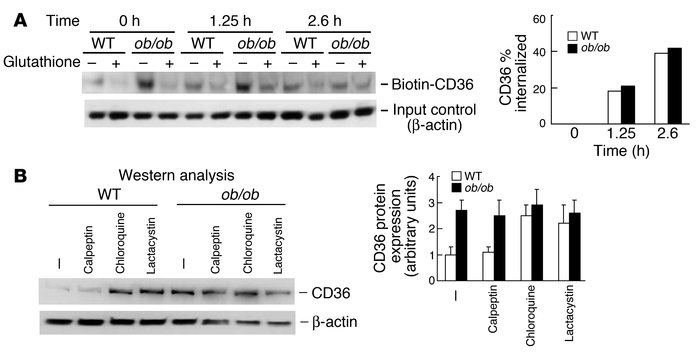 CD36 is internalized similarly in WT and / macrophages and is increased in lysosome- and proteasome-inhibited WT but not in / macrophages. (A) CD36 in / macrophages is endocytosed at a rate similar to that of WT cells. Cell surface proteins were biotinylated in pooled macrophages of five mice of each strain. One experiment representative of two independent experiments is shown. Biotinylated CD36 was allowed to internalize for different times, as indicated. Surface biotin was then removed with glutathione (+). Cells without glutathione (–) were used for the measurement of total biotinylated CD36 left in the cells at the time point. The total biotinylated CD36 at time 0 was used as a reference (100%) for the quantification of internalized CD36 (all corrected for input with β-actin). Percent internalization was calculated as described (). (B) CD36 protein is increased by lysosomal and proteasomal inhibitors in WT but not in / macrophages. Pooled macrophages isolated from five mice of each strain were treated with calpeptin (30 μg/ml), chloroquine (50 μM), or lactacystin (1 μM) for 1 day. Total lysates were prepared, and Western analysis was performed. One experiment representative of three independent experiments is shown.