IGF-1 has been associated with the pathogenesis of diabetic retinopathy, although its role is not fully understood. Here we show that normoglycemic/normoinsulinemic transgenic mice overexpressing IGF-1 in the retina developed most alterations seen in human diabetic eye disease. A paracrine effect of IGF-1 in the retina initiated vascular alterations that progressed from nonproliferative to proliferative retinopathy and retinal detachment. Eyes from 2-month-old transgenic mice showed loss of pericytes and thickening of basement membrane of retinal capillaries. In mice 6 months and older, venule dilatation, intraretinal microvascular abnormalities, and neovascularization of the retina and vitreous cavity were observed. Neovascularization was consistent with increased IGF-1 induction of VEGF expression in retinal glial cells. In addition, IGF-1 accumulated in aqueous humor, which may have caused rubeosis iridis and subsequently adhesions between the cornea and iris that hampered aqueous humor drainage and led to neovascular glaucoma. Furthermore, all transgenic mice developed cataracts. These findings suggest a role of IGF-1 in the development of ocular complications in long-term diabetes. Thus, these transgenic mice may be used to study the mechanisms that lead to diabetes eye disease and constitute an appropriate model in which to assay new therapies. 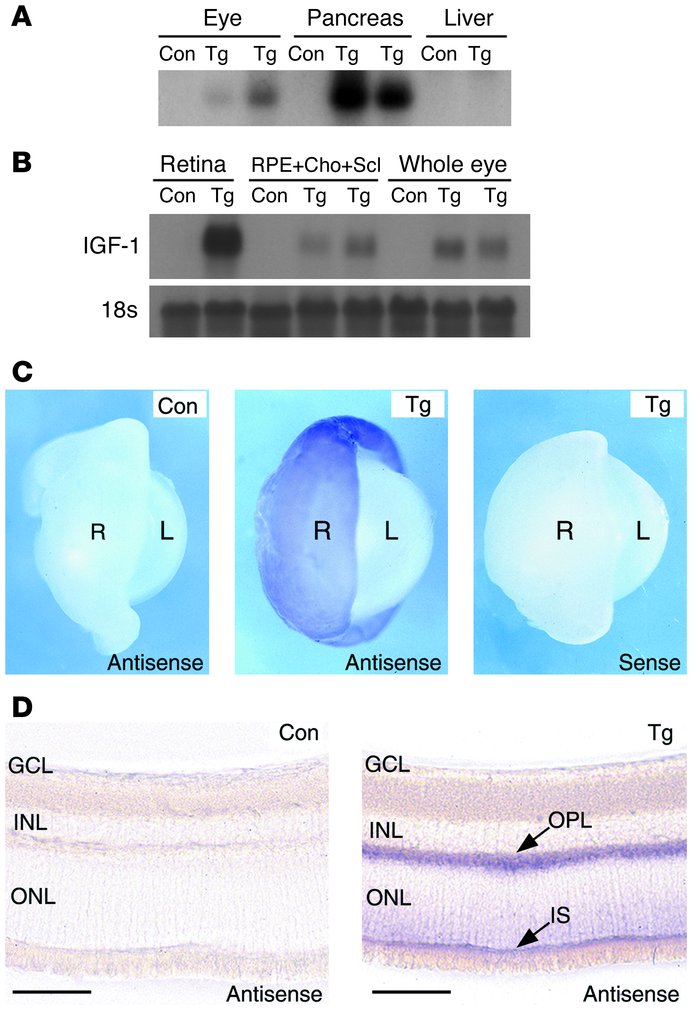 IGF-1 is overexpressed in eyes of transgenic mice. (A) RT-PCR confirmed that IGF-1 in the eye was a result of transgene expression. Pancreas mRNA was used as a positive control and liver mRNA as a negative control. The amplified band hybridized with an IGF-1 cDNA probe confirms the specificity of the RT-PCR. (B) Northern blot analysis was performed using samples from retina, retinal pigmented epithelium (RPE), choroid (Cho), sclera (Scl), and from the whole eye. Endogenous IGF-1 was detected only after long exposure (data not shown). (C) IGF-1 expression in transgenic retina by in situ hybridization. Sense probe did not give any signal. (D) In the transgenic retina, purple staining indicated expression of IGF-1 in the outer plexiform layer and in the inner segment of photoreceptors. No IGF-1 signal was observed in the retina of control mice. Con, control; GCL, ganglion cell layer; INL, inner nuclear layer; IS, inner segment of photoreceptors; L, lens; ONL, outer nuclear layer; OPL, outer plexiform layer; R, retina; Tg, transgenic. Scale bars: 72 μm.