CD4+CD25+ regulatory T (TR) cells have been described in both humans and mice. In mice, TR are thymically derived, and lack of TR leads to organ-specific autoimmunity. Recently, the forkhead/winged helix transcription factor, FoxP3, has been shown to be important for the function of TR cells in mice. In this study, human TR cells were examined and, in results similar to those of studies done in mice, expression of FoxP3 was found exclusively in CD4+CD25+ T cells and correlated with the suppressive activity of these cells. In contrast to the mouse studies, activation of human CD4+CD25– T cells led to expression of FoxP3. Expression of FoxP3 in activated human CD4+CD25+ cells also correlated with suppression of proliferation by these cells in freshly isolated CD4+CD25– T cells from the same donor. This suppression was cell-contact dependent and cytokine independent. Thus, in humans, during activation of CD4+CD25– T cells in an immune response, two populations of cells may arise, effector CD4+CD25+ and regulatory CD4+CD25+ T cells, with expression of FoxP3 correlated with regulatory activity. These data also raise the possibility that a failure to generate peripheral TR cells properly may contribute to autoimmune disease and suggest a possible therapeutic role for FoxP3 in the treatment of such diseases. 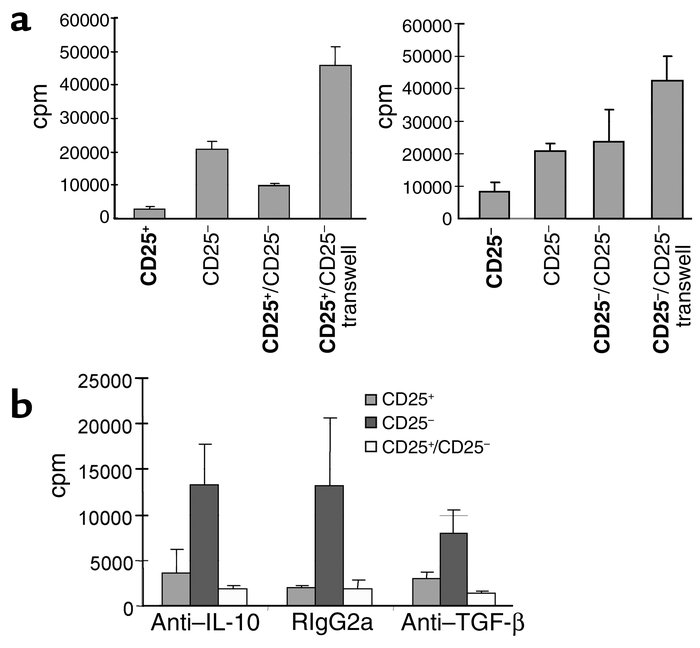 Activation-induced CD4+CD25+ regulatory T cells are cell-contact dependent and cytokine independent. Proliferation and suppression of freshly isolated CD4+CD25– T cells by CD4+CD25+ (, left panel, and ) or CD4+CD25– (, right panel) cells, which were generated by activation CD4+CD25– PBMCs with plate-bound anti-CD3/soluble anti-CD28 for 14 days. () CD4+CD25+ and CD4+CD25– cells from the same culture were sorted and cultured alone, together with freshly isolated CD25– cells, or separated by a transwell. Sorted cells are indicated in bold type and freshly isolated cells in normal type. () Cells were cultured in the presence of 10 μg/ml anti–IL-10, anti-TGF-β, or an isotype control Ab (RIgG2a). These data are from one experiment but are representative of two separate experiments.