T cell homing to sites of injury and inflammation is a critical step for adaptive immune responses. While much has been learned regarding T cell homing to lymphoid tissues, few studies have directly observed trafficking events during an effector response. In this study, we developed a model that uses intravital fluorescence videomicroscopy to determine the molecules critical to T cell rolling within skin allograft microvasculature during the effector phase of the rejection response. Additional studies were performed to quantify T cell infiltrates as rejection progressed. We found that P-selectin and E-selectin expressed on postcapillary venules play overlapping roles in the recruitment of activated T cells in a SCID reconstitution model of skin graft rejection and are important in T cell accumulation at the graft site. Surprisingly, we also found that naive T cells are recruited and accumulate via constitutive T cell L-selectin and upregulated L-selectin ligands on rejecting allograft vasculature. These data indicated that a specific retinue of molecules is upregulated during the rejection response, and they suggest potential future therapeutic targets. 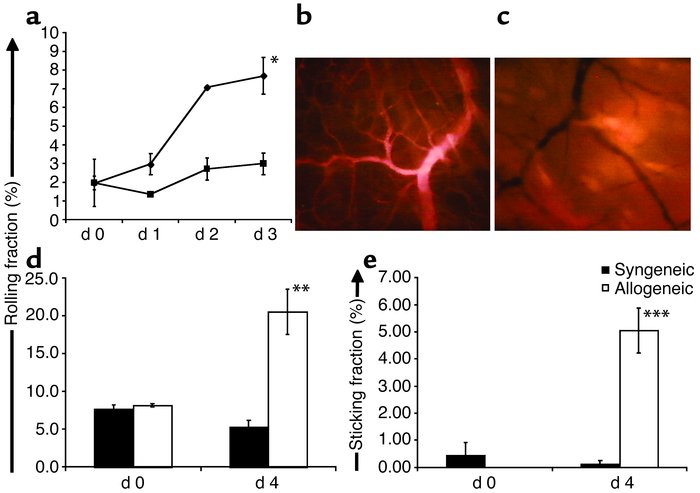 Graft rejection leads to enhanced rolling and firm adhesion interactions. () Adhesive interactions of CFSE-labeled naive T cells were analyzed at four time points after T cell reconstitution in venules of 1-month-healed syngeneic B6 (squares) and BALB/c allogeneic (diamonds) skin grafts on B6 SCID recipients. Rolling increased significantly in allografts as rejection progressed, and it remained equivalent at all time points in syngeneic grafts. * < 0.04. Data are mean ± SEM, representative of three experiments; = 3 in each group. () At day 4 of rejection, all vessels clearly illuminated with HMW TRITC-conjugated dextran. () At day 5 of rejection, vascular damage and interrupted flow were evident, as many small vessels (<50 μm) failed to illuminate with TRITC-dextran in allografts. ( and ) CFSE-labeled, activated T cells were infused at day 0 or day 4 after T cell reconstitution in SCID recipients of syngrafts and allografts. Labeled cells demonstrated equivalent rolling () and adhesion () at day 0 after reconstitution in BALB/c allografts (white bars) and B6 syngrafts (black bars) but showed a dramatic increase in rolling and firm adhesion by day 4 in allografts. ** < 0.04, *** < 0.03. Data are mean ± SEM; = 3 in each group.