Endocannabinoids and the regulation of body fat: the smoke is clearing

Endocannabinoids and the regulation of body fat: the smoke is clearing

Endocannabinoids, endogenous ligands of cannabinoid receptor type 1 (CB1), have emerged as novel and important regulators of energy homeostasis. A report in this issue demonstrates reduced body weight, fat mass, and appetite in CB1–/– mice. Examination of the underlying mechanisms reveals a dual role for endocannabinoids as they affect both appetite and peripheral lipolysis. 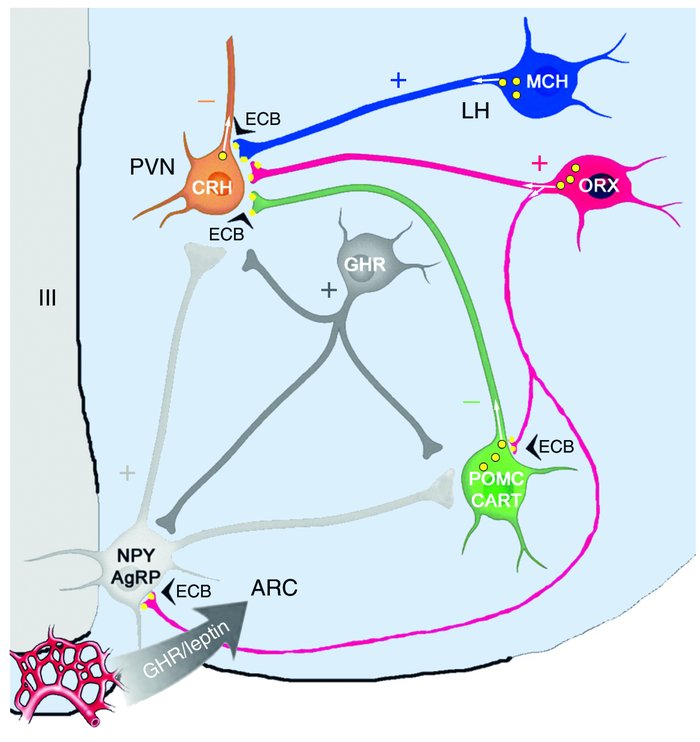 Schematic illustration showing the relationship between hypothalamic peptidergic circuits that express CB1 receptors (yellow cirlces), as described by Cota et al. (), and some of those that do not. The former include cells that produce CART and pro-opiomelanocortin (POMC) in the arcuate nucleus (ARC); neurons that express MCH (blue) and orexin (ORX; red) in the lateral hypothalamic (LH) region; and neurons that produce CRH (brown) in the paraventricular nucleus (PVN). CB1 receptors are produced in the cytosol of these cells (yellow circles outlined in black) and are transported (white arrows) to axon terminals. Here, the receptors, upon activation (black arrowheads) by endocannabinoids (ECB) or other agonists, are thought to affect the release of neuromodulators (MCH, ORX, CART, corticotropin-releasing factor) to the synaptic cleft. A population of neurons in the medial arcuate nucleus produces neuropeptide Y (NPY) and agouti-related protein (AgRP), both of which are considered regulators of energy homeostasis. The NPY/AgRP–producing neurons, as well as those that produce ghrelin (GHR), were not found to contain CB1 receptors (). GHR is also produced in the stomach and, together with the adipose hormone leptin, reaches hypothalamic peptidergic circuits via the circulation. The source of endocannabinoids in the hypothalamus is yet to be determined. Similarly, the hierarchical relationship between CB1-containing axon terminals and other axon terminals and their postsynaptic targets needs to be established to allow a better understanding of the hypothalamic signaling of cannabinoids. Putative inhibitory (–) and stimulatory (+) influences on food intake of the various elements of the peptidergic system are shown. Note that this influence on food intake may not reflect electrophysiological effects of the respective peptides. III, third ventricle.