Activation of PKCβII is associated with the response to ischemia/reperfusion (I/R), though its role, either pathogenic or protective, has not been determined. In a murine model of single-lung I/R, evidence linking PKCβ to maladaptive responses is shown in the following studies. Homozygous PKCβ-null mice and WT mice fed the PKCβ inhibitor ruboxistaurin subjected to I/R displayed increased survival compared with controls. In PKCβ-null mice, phosphorylation of extracellular signal–regulated protein kinase-1 and -2 (ERK1/2), JNK, and p38 MAPK was suppressed in I/R. Expression of the immediate early gene, early growth response-1 (Egr-1), and its downstream target genes was significantly increased in WT mice in I/R, particularly in mononuclear phagocytes (MPs), whereas this expression was attenuated in PKCβ-null mice or WT mice fed ruboxistaurin. In vitro, hypoxia/reoxygenation-mediated induction of Egr-1 in MPs was suppressed by inhibition of PKCβ, ERK1/2, and JNK, but not by inhibition of p38 MAPK. These findings elucidate key roles for PKCβII activation in I/R by coordinated activation of MAPKs (ERK1/2, JNK) and Egr-1. 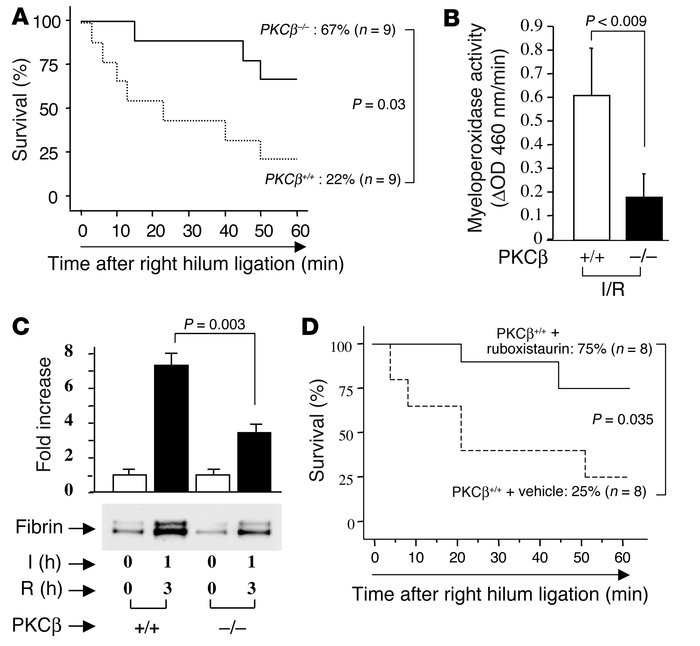 Murine model of lung ischemia/reperfusion (I/R): effect of PKCβ. ( and ) Survival analysis. β and β () and β mice fed vehicle chow or ruboxistaurin chow (), respectively, were subjected to left-lung ischemia for 1 hour and reperfusion for 3 hours. Blood flow to the uninstrumented right lung was then blocked, and mortality was determined after 1 hour with only the left lung in the circulation. () Myeloperoxidase activity. After I/R, lung samples were harvested from β and β mice and subjected to myeloperoxidase activity assay ( = 5). () After left-lung I/R as described above, animals received systemic heparin and were sacrificed. Lung protein extract was digested with plasmin and subjected to SDS-PAGE (7.5%; 0.2 ∝g of total protein/lane). Immunoblotting with anti-fibrin antibody was performed. Data are shown as mean ± SEM of five experiments.