Previously, we described an APC-adenovirus (APC-Ad) FasL cell gene therapy method which could be used to deplete autoreactive T cells in vivo. FasL was toxic, however, and controlled regulation of FasL was not achieved. Here we describe an improved approach to delivering TNF-related apoptosis-inducing ligand (TRAIL) in vivo in which collagen II–induced (CII-induced) arthritis–susceptible (CIA-susceptible) DBA/1j mice were treated with CII-pulsed DCs that had been transfected with a novel Ad system. The Ad was engineered to exhibit inducible TRAIL under the control of the doxycycline-inducible (DOX-inducible) tetracycline response element (TRE). Four groups of mice were treated with CII-DC-AdTRAIL+DOX, CII-DC-AdTRAIL (no DOX), CII-DC-AdGFP+DOX, or DC-AdTRAIL+DOX (no CII), beginning 2 weeks after priming with CII in CFA. The incidence of arthritis and infiltration of T cells in the joint was significantly decreased in CII-DC-AdTRAIL+DOX–treated mice. The in vitro splenic T cell proliferative response and induction of IFN-γ to bovine CII stimulation were also significantly reduced in mice treated with CII-DC-AdTRAIL+DOX. AdTRAIL+DOX was not toxic to DCs or mice but could induce activated T cells to undergo apoptosis in the spleen. Our results suggest that CII-DC-AdTRAIL+DOX cell gene therapy is a safe and effective method for inhibiting the development of CIA. 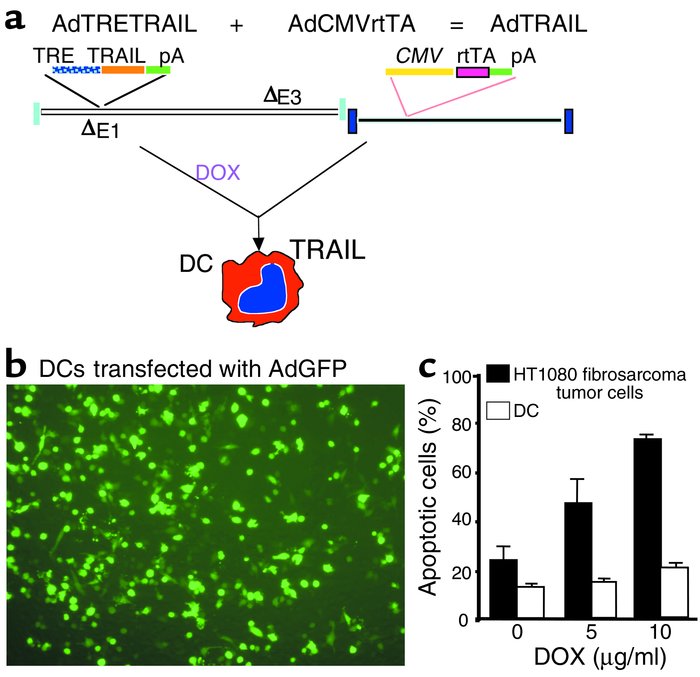