DNA vaccines and apoptosis: to kill or not to kill?

DNA vaccines and apoptosis: to kill or not to kill?

The apoptotic machinery has become the latest target of vaccinologists attempting to improve the efficacy of DNA vaccines. While workers have previously sought to induce apoptotic death in transfected DCs as a means to activate immunity, a new approach (see related article on pages 109–117) instead seeks to delay apoptosis in host DCs after DNA vaccination. 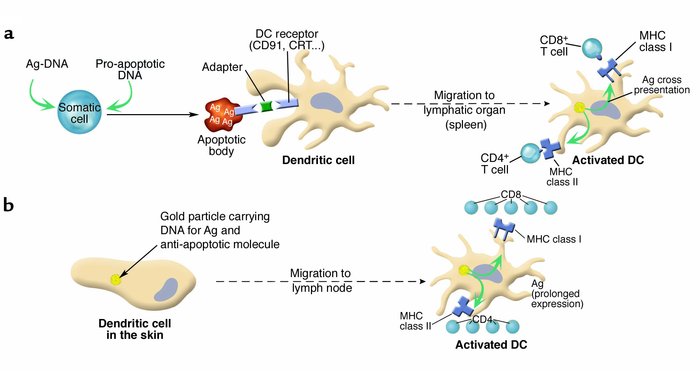 The enhancement of DNA-vaccine induced immune responses by the co-delivery of either pro- and antiapoptotic genes may be explained by the following model: () Mechanism for enhancement of DNA vaccines by induction of apoptosis. Proapoptotic genes are delivered together with the genes for the antigen of interest into somatic cells where both are expressed. The resulting apoptotic cells are recognized by professional APCs through an array of molecules found on the surfaces of dying cells through receptors such as CD36, ABC-1, CD14 CD19, or class A scavenger receptor. After ingestion and degradation of the antigen-loaded apoptotic cells the antigen presenting cell migrates to a lymphatic organ and presents the antigen of interest to CD4+ and CD8+ T cells. () Mechanism for enhancement of DNA vaccines by prevention of apoptosis. Antiapoptotic genes together with the genetic sequence for an antigen of interest are delivered by gene gun into the skin. DCs in the skin (Langerhans cells) are directly transfected and activated by the immunization (). These activated APCs migrate to the local lymph node where they present antigen to T cells. This antigen may have been produced from the DNA plasmid by the DC itself or may have been produced by another transfected cell in the skin and then ingested by the DC. Due to the co-expression of antiapoptotic molecules, the life span of the DC is increased thus allowing the prolonged presentation to T cells, resulting in enhanced T cell priming. Alternatively, the expression of antiapoptotic genes may protect the antigen-presenting cell from direct killing by activated T cells. CRT, calreticulin.