Salivary nitrate from dietary or endogenous sources is reduced to nitrite by oral bacteria. In the acidic stomach, nitrite is further reduced to NO and related compounds, which have potential biological activity. We used an in vivo rat model as a bioassay to test effects of human saliva on gastric mucosal blood flow and mucus thickness. Gastric mucosal blood flow and mucus thickness were measured after topical administration of human saliva in HCl. The saliva was collected either after fasting (low in nitrite) or after ingestion of sodium nitrate (high in nitrite). In additional experiments, saliva was exchanged for sodium nitrite at different doses. Mucosal blood flow was increased after luminal application of nitrite-rich saliva, whereas fasting saliva had no effects. Also, mucus thickness increased in response to nitrite-rich saliva. The effects of nitrite-rich saliva were similar to those of topically applied sodium nitrite. Nitrite-mediated effects were associated with generation of NO and S-nitrosothiols. In addition, pretreatment with an inhibitor of guanylyl cyclase markedly inhibited nitrite-mediated effects on blood flow. We conclude that nitrite-containing human saliva given luminally increases gastric mucosal blood flow and mucus thickness in the rat. These effects are likely mediated through nonenzymatic generation of NO via activation of guanylyl cyclase. This supports a gastroprotective role of salivary nitrate/nitrite. 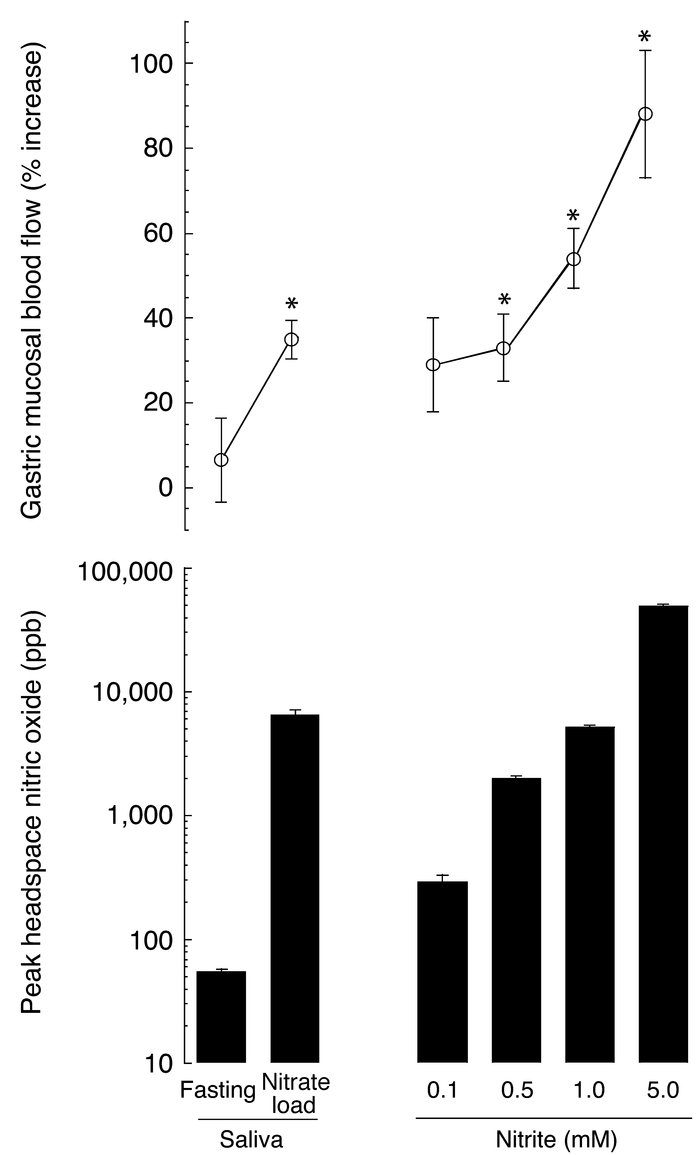 Maximum mucosal blood flow responses (upper panel, = 7–13 rats) after topical application of human saliva or sodium nitrite (0.1–5 mM) to the gastric mucosa in relation to generation of NO (lower graphs, = 5). Saliva or sodium nitrite solutions were mixed with HCl to pH 2. Final nitrite levels were 0.23 μM in experiments with fasting saliva and 1.1 mM when using saliva collected after a nitrate load. Values are expressed as mean ± SEM. * < 0.01 compared with baseline.