Glucocorticoids have potent immunosuppressive properties, but their effects are often modulated by the conditions prevailing in the local immune milieu. In this study we determined whether the action of glucocorticoids is influenced by the degree of signaling during T cell activation. We found that dexamethasone (Dex) effectively suppressed T cell receptor–induced (TCR-induced) proliferation of naive CD4+ T cells, through a mechanism involving downregulation of c-Fos expression and inhibition of activator protein-1 (AP-1), nuclear factor of activated T cells (NF-AT), and NF-κB transcriptional activity. However, enhancement of TCR signaling by CD28- or IL-2–mediated costimulation abrogated the suppressive effect of Dex on c-Fos expression and AP-1 function and restored cellular proliferation. The amount of signaling through the MAPK pathway was critical in determining the effect of Dex on T cell activation. In particular, costimulatory signaling via MAPK kinase (MEK) and extracellular signal–regulated kinase (ERK) was essential for the development of T cell resistance to Dex. Selective blockade of MEK/ERK signal transduction abolished the costimulation-induced resistance. In contrast, transmission of IL-2 signals via STAT5 and CD28 signals via NF-κB remained inhibited by Dex. These results imply that the immune system, by regulating the degree of local costimulation through MEK/ERK, can modify the effect of glucocorticoids on T cells. Moreover, these findings suggest that MAPK inhibitors may offer a therapeutic solution for glucocorticoid resistance. 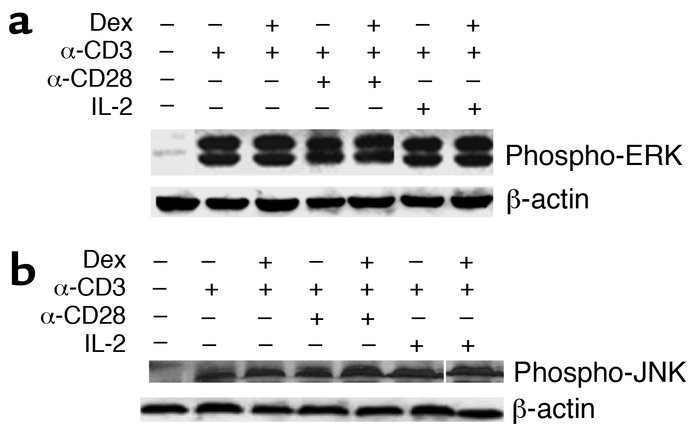 Dex treatment does not affect ERK and JNK activation. Cell extracts were prepared from Dex-treated and control naive CD4+ T cells stimulated with anti-CD3, anti-CD3 plus IL-2, or anti-CD3 plus anti-CD28. The phosphorylation of () ERK and () JNK was assessed by Western blotting using specific Ab’s. Results from a representative experiment are shown.