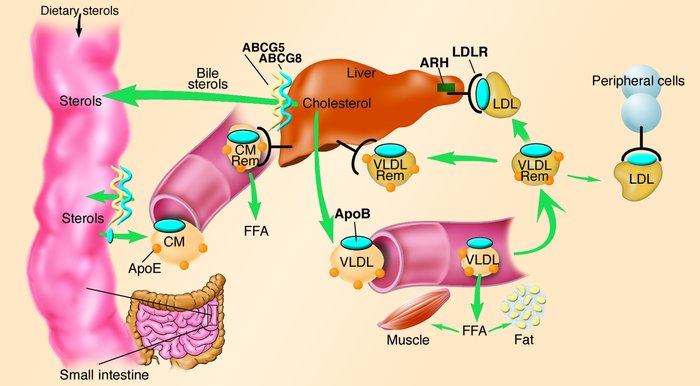 Overview of LDL metabolism in humans. Dietary cholesterol and triglycerides are packaged with apolipoproteins in the enterocytes of the small intestine, secreted into the lymphatic system as chylomicrons (CM). As chylomicrons circulate, the core triglycerides are hydrolyzed by lipoprotein lipase, resulting in the formation of chylomicron remnants (CM Rem), which are rapidly removed by the liver. Dietary cholesterol has four possible fates once it reaches the liver: it can be esterified and stored as cholesteryl esters in hepatocytes; packaged into VLDL particles and secreted into the plasma; secreted directly into the bile; or converted into bile acids and secreted into the bile. VLDL particles secreted into the plasma undergo lipolysis to form VLDL remnants (VLDL Rem). Approximately 50% of VLDL remnants are removed by the liver via the LDLR, and the remainder mature into LDL, the major cholesterol transport particle in the blood. An estimated 70% of circulating LDL is cleared by LDLR in the liver. ABCG5 and ABCG8 are located predominantly in the enterocytes of the duodenum and jejunum, the sites of uptake of dietary sterols, and in hepatocytes, where they participate in sterol trafficking into bile. Mutations in either transporter cause an increase in delivery of dietary sterols to the liver and a decrease in secretion of sterols into the bile. Autosomal recessive hypercholesterolemia (ARH) is a putative adaptor protein that is involved in the mechanics of LDLR-mediated endocytosis. ABCG: ATP-binding cassette, family G.