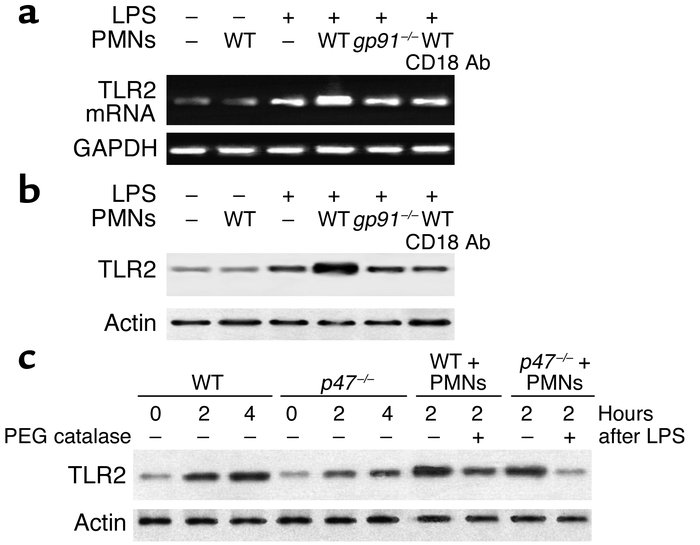 Augmented LPS induction of TLR2 in endothelial cells requires PMN NADPH oxidase and PMN adhesion. Studies determined the effects of PMNs cocultured with MLVECs on MLVEC TLR2 expression in response to LPS. MLVECs were isolated and cultured as described in Methods and treated with LPS (1 μg/ml) for 2 hours. The cocultured PMNs were isolated from WT and mice, respectively, and were added at a concentration of 1 × 105 cells/ml. At the end of incubation with LPS, MLVECs were washed with HBSS three times and then lysed with lysis buffer. Cell lysates were subjected to extraction of total RNA and RT-PCR analysis () as well as Western blotting with anti-TLR2 antibody (). To address the effects of CD18 on PMN-activated TLR2 expression in MLVECs, confluent MLVECs were treated with LPS in the presence of WT PMNs and anti-CD18 antibody for 2 hours, followed by washing with HBSS three times. This was followed by RT-PCR and Western analysis ( and , lane 6). () To address the role of endogenous endothelial NADPH oxidase in the regulation of TLR2 expression, MLVECs isolated from mice were stimulated with LPS and cocultured with or without WT PMNs for the times indicated. To address the role of oxidants derived from PMNs in LPS-induced TLR2 expression in endothelial cells, membrane-permeable PEG-catalase (1,000 U/ml) was applied to the coculture system. The data are representative of three independent studies.