The paired-like homeobox gene expressed in embryonic stem cells Hesx1/HESX1 encodes a developmental repressor and is expressed in early development in a region fated to form the forebrain, with subsequent localization to Rathke’s pouch, the primordium of the anterior pituitary gland. Mutations within the gene have been associated with septo-optic dysplasia, a constellation of phenotypes including eye, forebrain, and pituitary abnormalities, or milder degrees of hypopituitarism. We identified a novel homozygous nonconservative missense mutation (I26T) in the critical Engrailed homology repressor domain (eh1) of HESX1, the first, to our knowledge, to be described in humans, in a girl with evolving combined pituitary hormone deficiency born to consanguineous parents. Neuroimaging revealed a thin pituitary stalk with anterior pituitary hypoplasia and an ectopic posterior pituitary, but no midline or optic nerve abnormalities. This I26T mutation did not affect the DNA-binding ability of HESX1 but led to an impaired ability to recruit the mammalian Groucho homolog/Transducin-like enhancer of split-1 (Gro/TLE1), a crucial corepressor for HESX1, thereby leading to partial loss of repression. Thus, the novel pituitary phenotype highlighted here appears to be a specific consequence of the inability of HESX1 to recruit Groucho-related corepressors, suggesting that other molecular mechanisms govern HESX1 function in the forebrain. 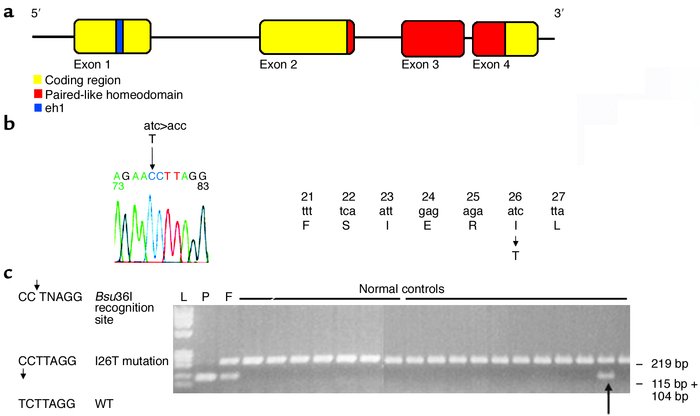 Schematic of the gene, mutation, and 36I restriction digest assay within a normal Brazilian population. () Genomic and protein structure of . consists of four exons encoding a 185-AA protein. The engrailed homology domain (AAs 21–27) is encoded by exon 1 and the -like homeodomain by exons 2–4. () Homozygous missense mutation within exon 1 leads to the substitution of an isoleucine residue (codon 26) by threonine in the engrailed homology domain eh1. () 36I restriction digests in pedigree 1 (F, father; P, patient) and 18 control samples. Digestion of a homozygous sample results in one band (104 + 115 bp fragment size), digestion of a heterozygous sample results in two bands (a 219-bp band from the normal allele and a band with the 104-bp and 115-bp fragments from the mutant allele), and digestion of a homozygous wild-type sample results in a single 219-bp band. The arrow indicates a normal control who is heterozygous for .