Atherosclerosis is now generally accepted as a chronic inflammatory condition. The transcription factor NF-κB is a key regulator of inflammation, immune responses, cell survival, and cell proliferation. To investigate the role of NF-κB activation in macrophages during atherogenesis, we used LDL receptor–deficient mice with a macrophage-restricted deletion of IκB kinase 2 (IKK2), which is essential for NF-κB activation by proinflammatory signals. These mice showed increased atherosclerosis as quantified by lesion area measurements. In addition, the lesions were more advanced and showed more necrosis and increased cell number in early lesions. Southern blotting revealed that deletion of IKK2 was approximately 65% in macrophages, coinciding with a reduction of 50% in NF-κB activation, as compared with controls. In both groups, the expression of differentiation markers, uptake of bacteria, and endocytosis of modified LDL was similar. Upon stimulation with LPS, production of TNF was reduced by approximately 50% in IKK2-deleted macrophages. Interestingly, we also found a major reduction in the anti-inflammatory cytokine IL-10. Our data show that inhibition of the NF-κB pathway in macrophages leads to more severe atherosclerosis in mice, possibly by affecting the pro- and anti-inflammatory balance that controls the development of atherosclerosis. 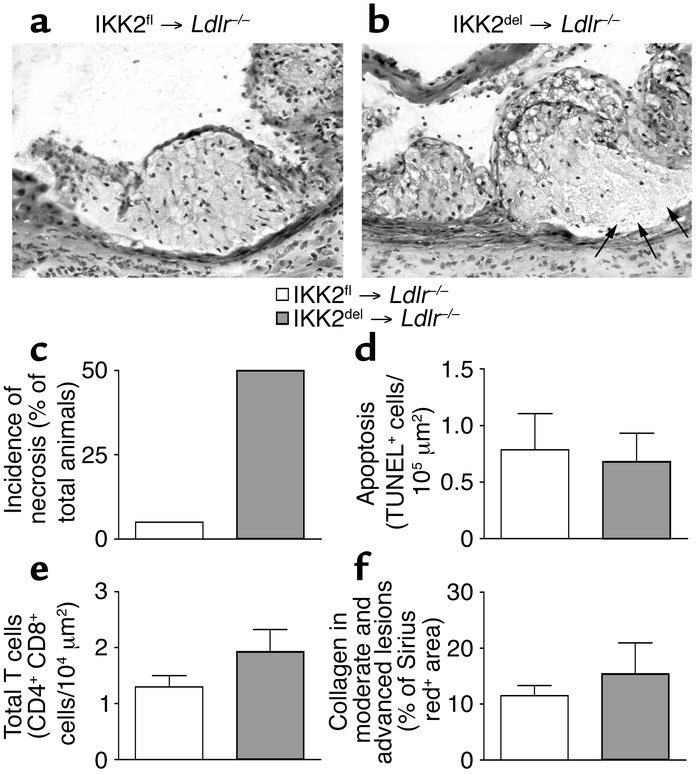