Epidemiologic studies demonstrate that long-term use of NSAIDs is associated with a reduced risk for the development of Alzheimer disease (AD). In this study, 20 commonly used NSAIDs, dapsone, and enantiomers of flurbiprofen were analyzed for their ability to lower the level of the 42-amino-acid form of amyloid β protein (Aβ42) in a human H4 cell line. Thirteen of the NSAIDs and the enantiomers of flurbiprofen were then tested in acute dosing studies in amyloid β protein precursor (APP) transgenic mice, and plasma and brain levels of Aβ and the drug were evaluated. These studies show that (a) eight FDA-approved NSAIDs lower Aβ42 in vivo, (b) the ability of an NSAID to lower Aβ42 levels in cell culture is highly predicative of its in vivo activity, (c) in vivo Aβ42 lowering in mice occurs at drug levels achievable in humans, and (d) there is a significant correlation between Aβ42 lowering and levels of ibuprofen. Importantly, flurbiprofen and its enantiomers selectively lower Aβ42 levels in broken cell γ-secretase assays, indicating that these compounds directly target the γ-secretase complex that generates Aβ from APP. Of the compounds tested, meclofenamic acid, racemic flurbiprofen, and the purified R and S enantiomers of flurbiprofen lowered Aβ42 levels to the greatest extent. Because R-flurbiprofen reduces Aβ42 levels by targeting γ-secretase and has reduced side effects related to inhibition of cyclooxygenase (COX), it is an excellent candidate for clinical testing as an Aβ42 lowering agent. 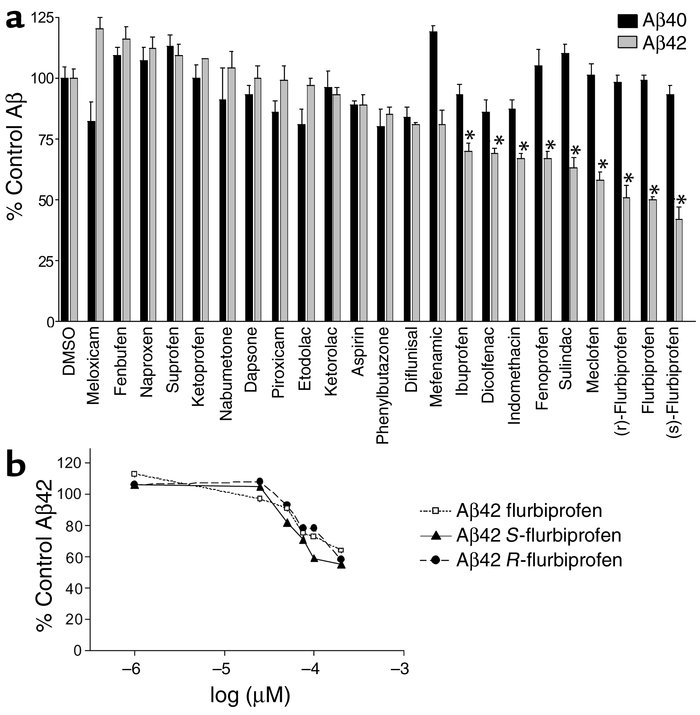 Effects of NSAIDs on Aβ42 production in human neuroglioma line. () H4 cells were treated for 6 hours with 100 μM of the compounds dissolved in DMSO vehicle, and Aβ levels in the media were determined by Aβ ELISA. Results are the average of two experiments, each performed in duplicate. Compounds are ordered by effect on Aβ42. Experimental values are compared to six control samples. * < 0.05 by ANOVA with Dunnet’s post hoc correction. Aβ40 production was not significantly affected by any of the compounds when tested at 100 μM. () Dose response of racemic, - and -flurbiprofen. H4 cells were treated with various concentrations of racemic flurbiprofen or its purified enantiomers. All three forms of flurbiprofen selectively lower Aβ42 to approximately identical extents. At concentrations above 300 μM, moderate reductions in Aβ40 were seen, but LDH assays indicated cells treated at these doses exhibited signs of toxicity. In these experiments, control values for secreted Aβ40 and Aβ42 were greater than 500 pM and 40 pM, respectively.