Alzheimer disease (AD) is characterized by the progressive deposition of the 42-residue amyloid β protein (Aβ) in brain regions serving memory and cognition. In animal models of AD, immunization with Aβ results in the clearance of Aβ deposits from the brain. However, a trial of vaccination with synthetic human Aβ1–42 in AD resulted in the development of meningoencephalitis in some patients. We measured cellular immune responses to Aβ in middle-aged and elderly healthy subjects and in patients with AD. A significantly higher proportion of healthy elderly subjects and patients with AD had strong Aβ-reactive T cell responses than occurred in middle-aged adults. The immunodominant Aβ epitopes in humans resided in amino acids 16–33. Epitope mapping enabled the identification of MHC/T cell receptor (TCR) contact residues. The occurrence of intrinsic T cell reactivity to the self-antigen Aβ in humans has implications for the design of Aβ vaccines, may itself be linked to AD susceptibility and course, and appears to be associated with the aging process. 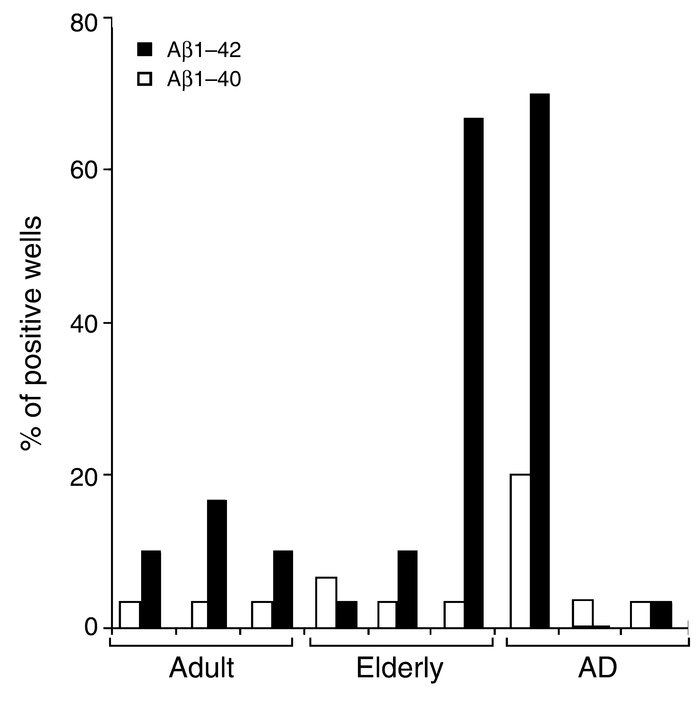 Aβ1–42 is more immunogenic than Aβ1–40. PBMCs were isolated from nine subjects (three adults, three older healthy subjects, and three patients with clinically mild or moderate AD) and cultured in U-bottom 96-well plates in the presence of human Aβ1–40 or Aβ1–42 (30 wells per peptide) as described in Methods. Cells were then restimulated at day 10 in the presence or absence of the peptide used initially. T cell proliferation was measured by [3H]thymidine incorporation 72 hours after the secondary stimulation. The percentage of positive wells was obtained according to the number of wells (out of 30) with SIs (cpm in the presence of antigen divided by cpm in the absence of antigen) of at least 2.5 and a Δcpm of at least 2,000.