The paradigm for recovery of the renal tubule from acute tubular necrosis is that surviving cells from the areas bordering the injury must migrate into the regions of tubular denudation and proliferate to re-establish the normal tubular epithelium. However, therapies aimed at stimulating these events have failed to alter the course of acute renal failure in human trials. In the present study, we demonstrate that Lin–Sca-1+ cells from the adult mouse bone marrow are mobilized into the circulation by transient renal ischemia and home specifically to injured regions of the renal tubule. There they differentiate into renal tubular epithelial cells and appear to constitute the majority of the cells present in the previously necrotic tubules. Loss of stem cells following bone marrow ablation results in a greater rise in blood urea nitrogen after renal ischemia, while stem cell infusion after bone marrow ablation reverses this effect. Thus, therapies aimed at enhancing the mobilization, propagation, and/or delivery of bone marrow stem cells to the kidney hold potential as entirely new approaches for the treatment of acute tubular necrosis. 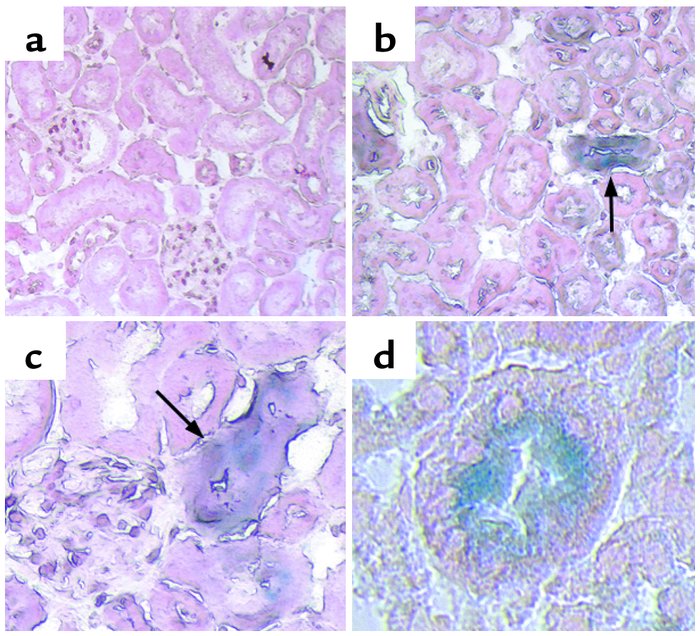 Bone marrow–derived cells populate the renal tubule. Transplantation of whole bone marrow from Rosa26 mice into C57BL/6J recipient mice results in the spontaneous appearance of β-galactosidase–positive cells (blue) in the tubules of the renal cortex of the transplanted mice after 12 weeks (arrows). Control mice () do not have β-galactosidase–positive tubules. and , ×20; , ×40; , ×60.