IL-12 p40–related cytokines such as IL-12 p35/p40 heterodimer and IL-23 (p19/p40) are potent regulators of adaptive immune responses. Little is known, however, about the transcriptional regulation of the p40 gene in vivo. In an attempt toward this goal, we have generated transgenic mice expressing firefly luciferase under the control of the IL-12 p40 promoter. High constitutive transgene expression was found in the small intestine only, whereas little reporter gene activity was observed in other tissues. Within the small bowel, constitutive promoter activity was restricted to the terminal ileum and associated with high expression of p40 mRNA as well as p40 and IL-23 p19/p40 proteins. The cells constitutively producing IL-12 p40 were identified as CD8α and CD11b double-negative CD11c+ lamina propria dendritic cells (LPDCs) that represent a major cell population in the lamina propria of the small intestine, but not in the colon. FISH directly demonstrated the uptake of bacteria by a subset of LPDCs in the terminal ileum that was associated with p40 expression. Furthermore, little or no p40 protein expression in LPDCs was found in the terminal ileum of germfree mice, indicating a key role of the intestinal flora for constitutive p40 expression. In addition, analysis of transgenic mice with a mutated NF-κB target site in the p40 promoter showed a critical role of NF-κB for constitutive transgene expression. Our data reveal important functional differences between the mucosal immune systems of the small and large bowel in healthy mice and suggest that the high bacterial load in the terminal ileum activates p40 gene transcription in LPDCs through NF-κB. These data suggest a predisposition of the terminal ileum to develop chronic inflammatory responses through IL-23 and thus may provide a molecular explanation for the preferential clinical manifestation of Crohn disease in this part of the gut. 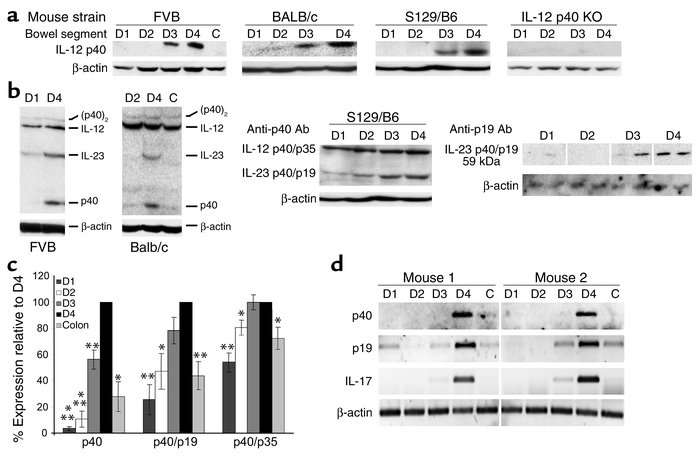 Nonreducing Western blot analysis of gut samples from the small intestine (D1–D4) and colon (C). Samples were analyzed for p40, p40/p19 (IL-23), p40/p35 (IL-12), and p40 homodimer (p40)2 levels. β-Actin staining served as loading control. () Western blot for monomeric p40 protein using extracts from different mouse strains. Extracts from IL-12 p40 S129/B6 KO mice served as negative control (far right panel). () Analysis of higher molecular weight p40 complexes in FVB and BALB/c mice (left panels) and S129/B6 mice (middle panel, same blot as in ). A marked increase of IL-23 p40/p19, but not IL-12 p40/p19 levels was noted in the distal small bowel as compared with the proximal segments of the small intestine. Right panel: These data were confirmed by Western blot analysis using an IL-23–specific AB (four mice per group, two shown). () Densitometry of above p40 Western blots. Data are reported as percentage of expression as compared with D4 (100%). Data represent average values ± SD of six to eight mice per group. Statistically significant differences (* < 0.05, ** < 0.01, *** < 0.001) are indicated. () RT-PCR analysis of RNA isolated from the small (D1–D4) and large (C) intestine of healthy FVB mice. A marked upregulation in D4 as compared to the proximal small intestine and colon was seen for the mRNAs of p19 and p40, but, importantly, also for the mRNA of IL-17, a recently identified target gene of IL-23 in memory T cells ().