Although the role of estradiol in maintaining bone mass is well established, the relative contributions of the estradiol receptors ERα and ERβ and of the androgen receptor (AR) remain controversial. To determine the role of ERα-mediated, ERβ-mediated, and non–ER-mediated mechanisms in maintaining bone mass, gonadectomy and estradiol treatment were studied in ER-knockout mice. Estradiol treatment of ovariectomized ERαβ–/– mice failed to prevent bone loss, precluding significant effects of estradiol on bone through non–ER-signaling pathways. In contrast, estradiol prevented ovariectomy-induced bone loss in ERβ–/– mice, as in WT males and females, indicating that ERα is the major mediator of estradiol effects in bone. No response of bone to estradiol was detected in orchidectomized ERα–/– mice, suggesting estradiol cannot protect bone mass via the AR in vivo. In contrast to female ERαβ–/– and male ERα–/– mice, female ERα–/– mice were partially protected against ovariectomy-induced bone loss by estradiol, confirming that ERβ mediates estradiol effects in bone, but only in females and with a lower efficacy than ERα. We conclude that ERα is the main effector of estradiol’s protective function in bone in both male and female mice, and that, in its absence, AR is not sufficient to mediate this response. 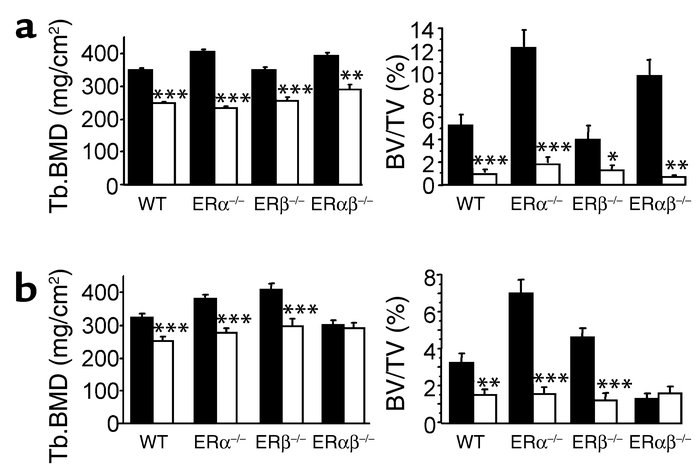 Response of WT and ER knockout mice to gonadectomy. Mice were sham-operated (black bars) or gonadectomized (white bars) at 12 weeks of age, and bones were collected after 8 weeks. () Tb.BMD and BV/TV were significantly reduced in male mice of all genotypes after orchidectomy. () Tb.BMD and BV/TV were significantly reduced after ovariectomy in female mice of all genotypes except ERαβ–/–. Values are mean ± SEM. * < 0.05, ** < 0.01, *** < 0.001 vs. sham-operated of the same genotype.