Regulated recruitment and clearance of neutrophils (PMN) is the hallmark of competent host defense and resolution of inflammation. We now report that IFN-γ controls PMN infiltration and modulates IL-6 signaling through its soluble receptor (sIL-6R) to promote their apoptosis and clearance. Induction of peritoneal inflammation in IFN-γ–deficient (IFN-γ–/–) mice emphasized that the initial rate of PMN recruitment was impaired. This defect in PMN recruitment was also associated with the suppressed intraperitoneal expression of IL-1β and IL-6. Reconstitution of IFN-γ signaling restored the rate of PMN infiltration and IL-6 levels and was accompanied by normalization of PMN-activating CXC chemokine expression. To test whether local IL-6 signaling modulated PMN recruitment, inflammation was induced in IFN-γ–/– and IL-6–/– mice and cytokine signaling adapted by intraperitoneal sIL-6R–IL-6 fusion protein (HYPER-IL-6) or IFN-γ. Although HYPER-IL-6 attenuated PMN influx in IFN-γ–/– mice, IFN-γ had no effect on PMN infiltration in IL-6–/– mice. Examination of the leukocyte infiltrate from IFN-γ–/–, IL-6–/–, and wild-type mice showed that apoptosis was aberrant in the absence of IFN-γ and IL-6 as a result of impaired sIL-6R signaling. These data emphasize a pivotal role for IFN-γ in regulating innate immunity through control of both the recruitment and clearance phases of PMN trafficking. 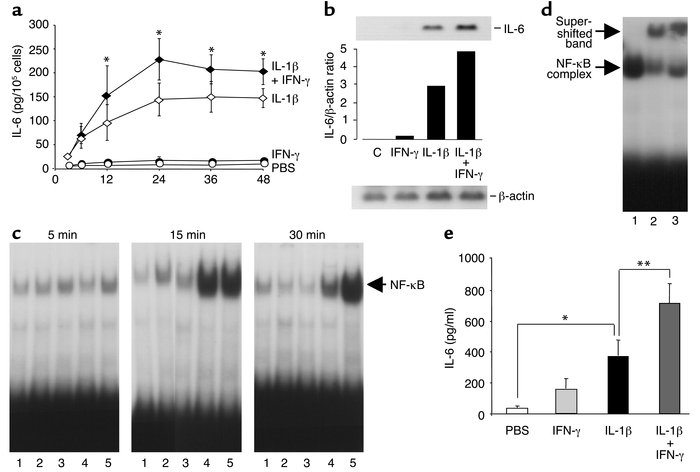