Viruses can cause but can also prevent autoimmune disease. This dualism has certainly hampered attempts to establish a causal relationship between viral infections and type 1 diabetes (T1D). To develop a better mechanistic understanding of how viruses can influence the development of autoimmune disease, we exposed prediabetic mice to various viral infections. We used the well-established NOD and transgenic RIP-LCMV models of autoimmune diabetes. In both cases, infection with the lymphocytic choriomeningitis virus (LCMV) completely abrogated the diabetic process. Interestingly, such therapeutic viral infections resulted in a rapid recruitment of T lymphocytes from the islet infiltrate to the pancreatic draining lymph node, where increased apoptosis was occurring. In both models this was associated with a selective and extensive expression of the chemokine IP-10 (CXCL10), which predominantly attracts activated T lymphocytes, in the pancreatic draining lymph node, and in RIP-LCMV mice it depended on the viral antigenic load. In RIP-LCMV mice, blockade of TNF-α or IFN-γ in vivo abolished the prevention of T1D. Thus, virally induced proinflammatory cytokines and chemokines can influence the ongoing autoaggressive process beneficially at the preclinical stage, if produced at the correct location, time, and levels. 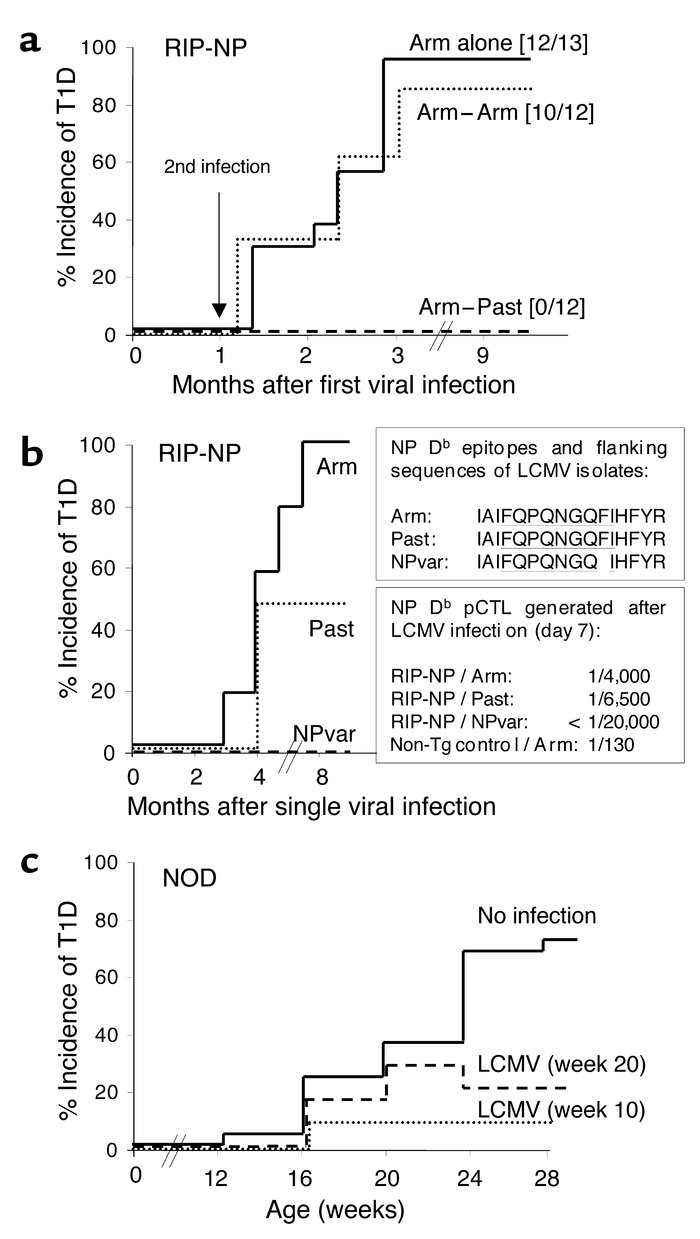 Prevention of T1D in NOD and RIP-LCMV mice by LCMV infection given during the prediabetic phase. () Cumulative incidence of diabetes in RIP-LCMV-NP mice infected i.p. with 105 PFUs of LCMV-Arm on day 0. One month after infection, mice were infected i.p. with 105 PFUs of either LCMV-Arm (Arm-Arm) or LCMV-Past (Arm-Past). Blood glucose was measured in biweekly intervals for at least 9 months, and values greater than 300 mg/dl were considered diabetic. The number of diabetic mice and the total number of animals used per group are indicated in brackets. () Groups of 10–15 RIP-LCMV-NP H-2b mice were infected i.p. with 105 PFUs of various LCMV strains (single infection). Blood glucose values were determined as described in Methods. The NP escape variant contains a single amino acid change from F to L in position AA404 of the immunodominant H-2Db NP396 peptide, which prevents binding of the variant NP396 to H-2Db (). pCTL analysis was performed 7 days after infection as described in Methods. Note that RIP-NP mice express the LCMV-NP antigen in their thymus in addition to their islets and therefore have reduced numbers of NP CTLs in their periphery and develop diabetes more slowly, as reported by us previously (). Non-Tg, nontransgenic C57BL/6 mice. () Groups of 10–15 NOD mice were infected i.p. with 105 PFUs of LCMV-Arm (single infection) at week 10 or 20 of age. Blood glucose values were determined every 4 weeks.