Aldosterone controls the final sodium reabsorption and potassium secretion in the kidney by regulating the activity of the epithelial sodium channel (ENaC) in the aldosterone-sensitive distal nephron (ASDN). ASDN consists of the last portion of the distal convoluted tubule (late DCT), the connecting tubule (CNT), and the collecting duct (CD) (i.e., the cortical CD [CCD] and the medullary CD [MCD]). It has been proposed that the control of sodium transport in the CCD is essential for achieving sodium and potassium balance. We have tested this hypothesis by inactivating the α subunit of ENaC in the CD but leaving ENaC expression in the late DCT and CNT intact. Under salt restriction or under aldosterone infusion, whole-cell voltage clamp of principal cells of CCD showed no detectable ENaC activity, whereas large amiloride-sensitive currents were observed in control littermates. The animals survive well and are able to maintain sodium and potassium balance, even when challenged by salt restriction, water deprivation, or potassium loading. We conclude that the expression of ENaC in the CD is not a prerequisite for achieving sodium and potassium balance in mice. This stresses the importance of more proximal nephron segments (late DCT/CNT) to achieve sodium and potassium balance. 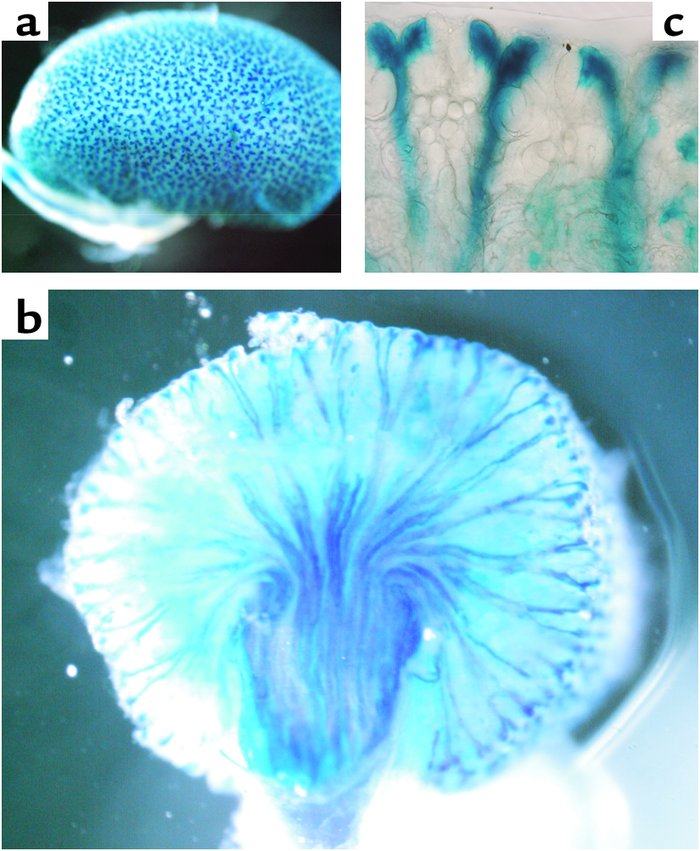 Expression of the promoter using the reporter system. The activity of is assayed by analysis of the Rosa reporter. () An intact P1 kidney stained with X-gal showing that is active in the CCDs and ureter (magnification, ×20). () A stained, thick section reveals activity throughout the CCD and MCD system (magnification, ×50). () 20 μM sections of stained kidneys demonstrate that is active in most if not all cells of the CD system (magnification, ×400). Some additional, mosaic staining is viewed in cells of the CNT and/or DCT, most likely due to mixing of cells at the fusion point of these two lineages.