The pulmonary collectins, surfactant proteins A (SP-A) and D (SP-D), have been reported to bind lipopolysaccharide (LPS), opsonize microorganisms, and enhance the clearance of lung pathogens. In this study, we examined the effect of SP-A and SP-D on the growth and viability of Gram-negative bacteria. The pulmonary clearance of Escherichia coli K12 was reduced in SP-A–null mice and was increased in SP-D–overexpressing mice, compared with strain-matched wild-type controls. Purified SP-A and SP-D inhibited bacterial synthetic functions of several, but not all, strains of E. coli, Klebsiella pneumoniae, and Enterobacter aerogenes. In general, rough E. coli strains were more susceptible than smooth strains, and collectin-mediated growth inhibition was partially blocked by coincubation with rough LPS vesicles. Although both SP-A and SP-D agglutinated E. coli K12 in a calcium-dependent manner, microbial growth inhibition was independent of bacterial aggregation. At least part of the antimicrobial activity of SP-A and SP-D was localized to their C-terminal domains using truncated recombinant proteins. Incubation of E. coli K12 with SP-A or SP-D increased bacterial permeability. Deletion of the E. coli OmpA gene from a collectin-resistant smooth E. coli strain enhanced SP-A and SP-D–mediated growth inhibition. These data indicate that SP-A and SP-D are antimicrobial proteins that directly inhibit the proliferation of Gram-negative bacteria in a macrophage- and aggregation-independent manner by increasing the permeability of the microbial cell membrane. 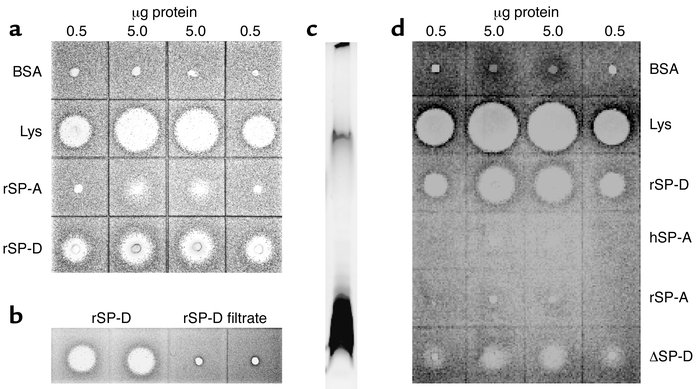 Inhibition of bacterial growth by SP-A and SP-D is independent of bacterial aggregation. Molten agarose was mixed with ( and ) or a clinical isolate from a septic patient (), plated in Petri dishes, and allowed to cool. Wells were bored in the agar, and proteins (0.5 or 5.0 μg/well) were added for overnight incubation. () BSA, lysozyme (Lys), rSP-A, or rSP-D was incubated with . () was incubated with 5 μg rSP-D (first two wells) or the protein-free filtrate (molecular weight cutoff of 10,000) from the 1-mg/ml rSP-D reagent (last two wells). () Silver-stained SDS-PAGE gel of clinical isolate showing slow- and fast-migrating species, consistent with smooth LPS phenotype. () Clinical isolate incubated with the same proteins as , as well as hSP-A and ΔSP-D, a D203–F355 C-terminal fragment of recombinant mouse SP-D containing only the C-terminal domains.