The serine/threonine kinase Akt/PKB plays key roles in the regulation of cell growth, survival, and metabolism. It remains unclear, however, whether the functions of individual Akt/PKB isoforms are distinct. To investigate the function of Akt2/PKBβ, mice lacking this isoform were generated. Both male and female Akt2/PKBβ-null mice exhibit mild growth deficiency and an age-dependent loss of adipose tissue or lipoatrophy, with all observed adipose depots dramatically reduced by 22 weeks of age. Akt2/PKBβ-deficient mice are insulin resistant with elevated plasma triglycerides. In addition, Akt2/PKBβ-deficient mice exhibit fed and fasting hyperglycemia, hyperinsulinemia, glucose intolerance, and impaired muscle glucose uptake. In males, insulin resistance progresses to a severe form of diabetes accompanied by pancreatic β cell failure. In contrast, female Akt2/PKBβ-deficient mice remain mildly hyperglycemic and hyperinsulinemic until at least one year of age. Thus, Akt2/PKBβ-deficient mice exhibit growth deficiency similar to that reported previously for mice lacking Akt1/PKBα, indicating that both Akt2/PKBβ and Akt1/PKBα participate in the regulation of growth. The marked hyperglycemia and loss of pancreatic β cells and adipose tissue in Akt2/PKBβ-deficient mice suggest that Akt2/PKBβ plays critical roles in glucose metabolism and the development or maintenance of proper adipose tissue and islet mass for which other Akt/PKB isoforms are unable to fully compensate. 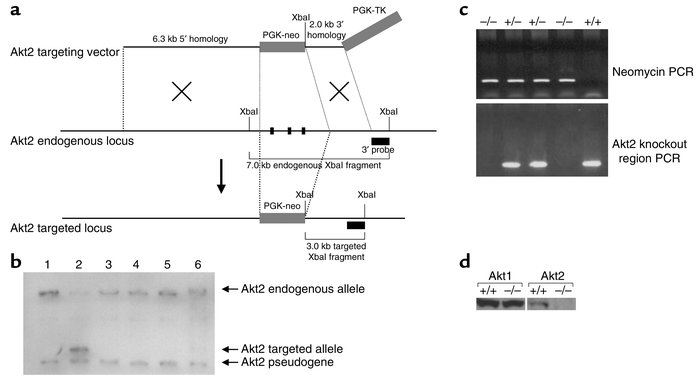 Generation of Akt2-deficient mice. () Illustration depicting strategy for homologous recombination in DBA/1J ES cells. The locations of the 3′ probe and recognition sites used for Southern blot screening of the ES cells are indicated. The cassette was inserted in the same orientation as the gene. () Southern blot analysis of DNA isolated from ES cells transfected with the targeting vector. Genomic DNA from six ES cell clones was isolated and digested with restriction endonuclease and hybridized with the external 1.0-kb 3′ probe. This probe will recognize a 7.0-kb endogenous, 3.0-kb targeted, and 2.7-kb pseudogene XbaI fragment. The probe recognizes the pseudogene due to the presence of a 3′ exon, also contained in the pseudogene sequence. Note that only clone 2 contains the targeted allele. () PCR genotyping analysis of F2-generation mice. Two PCR reactions are performed on each sample; one is specific for a targeted allele (top panel) and the other is specific for the Akt2 locus within the knockout region (bottom panel). Taken together, all three genotypes, wild-type, heterozygous, and homozygous (+/+, +/–, and –/–), can be determined. () Western blot analysis of protein extracts from brains isolated from and mice. The blot to the left was hybridized with an anti-Akt1 Ab and the one to the right with an anti-Akt2 Ab.