Our understanding of the genetic basis of disease has expanded with the identification of rare DNA sequence variations (“mutations”) that evoke inherited syndromes such as cystic fibrosis, congenital epilepsy, and cardiac arrhythmias. Common sequence variants (“polymorphisms”) have also been implicated as risk factors in multiple diseases. Mutations in SCN5A, the cardiac Na+ channel gene, that cause a reduction in Na+ current may evoke severe, life-threatening disturbances in cardiac rhythm (i.e., Brugada syndrome), isolated cardiac conduction disease, or combinations of these disorders. Conduction disease is manifest clinically as heart rate slowing (bradycardia), syncope, or “lightheadedness”. Recent electrophysiologic studies reveal that mutations in particular families exhibiting cardiac conduction disease cause marked effects on several competing voltage-dependent gating processes, but nonetheless cause a mild “net” reduction in Na+ current. Here we show that a common SCN5A polymorphism (H558R) in the Na+ channel I-II interdomain cytoplasmic linker, present in 20% of the population, can mitigate the in vitro effects of a nearby mutation (T512I) on Na+ channel function. The mutation and the polymorphism were both found in the same allele of a child with isolated conduction disease, suggesting a direct functional association between a polymorphism and a mutation in the same gene. 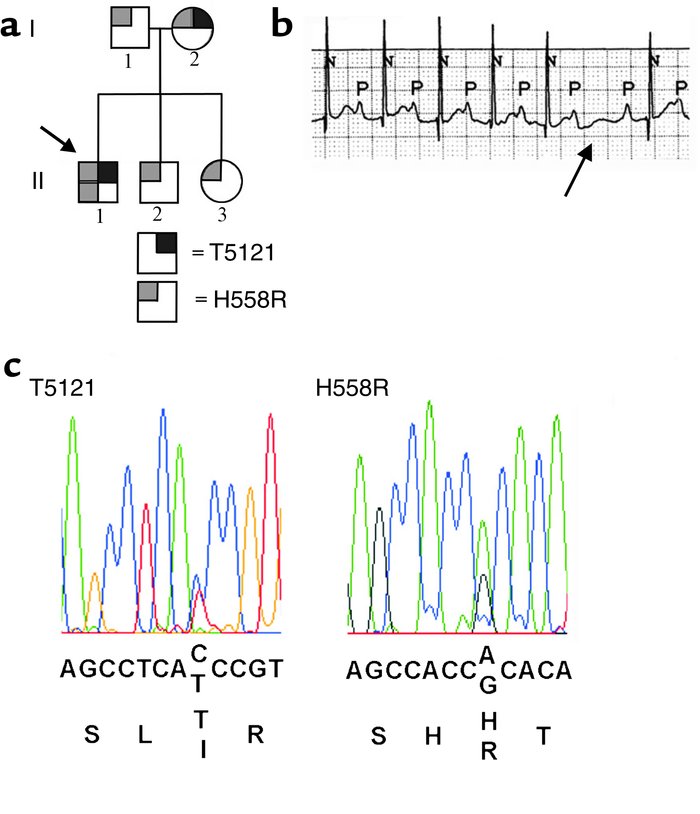