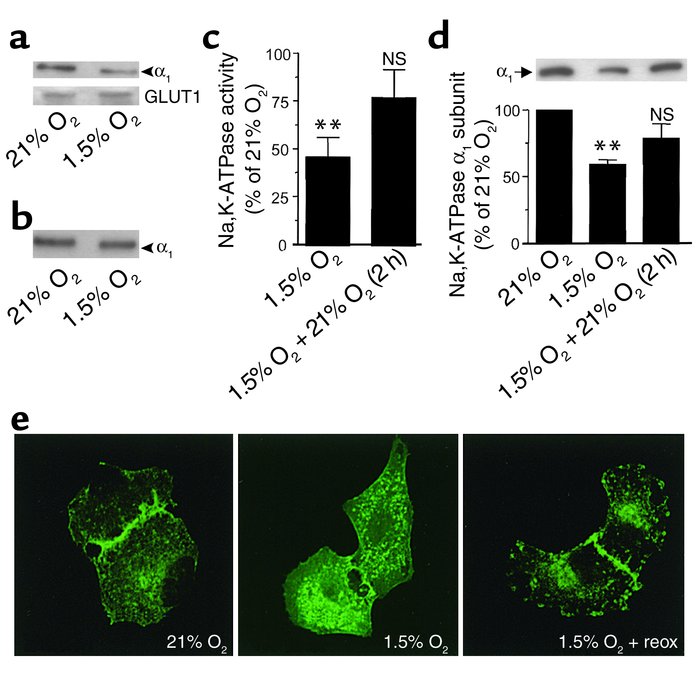 Effects of hypoxia on Na,K-ATPase activity and α1 protein abundance at the plasma membrane is specific and reversible. () Na,K-ATPase abundance at the plasma membrane was examined in A549 cells exposed to 1.5% O2 for 60 minutes and surface biotinylated. Cell lysates (150 μg of protein) were pulled down with streptavidin beads. Western blot was performed using Na,K-ATPase α1 subunit (upper panel) or GLUT1 (lower panel) antibody. () Cells were surface labeled with biotin before hypoxia (1.5% O2 for 60 minutes). Cell lysates (150 μg of protein) were pulled down with streptavidin beads, and Na,K-ATPase protein abundance was determined as described in . () A549 cells were exposed to 21% O2 or 1.5% O2 for 60 minutes, and then one group (1.5% O2) was returned to 21% O2 for 2 hours. Na,K-ATPase activity was determined by 86Rb+ uptake and expressed as a percentage of control (21% O2). Bars represent the means ± SD of three experiments performed in duplicate. ** < 0.01. () A549 cells were exposed to the same protocol as described in , and Na,K-ATPase abundance was determined. Each bar represents the mean ± SD of three experiments. A representative Western blot is shown. ** < 0.01. () GFP-α1 A549 cells were plated onto glass coverslips and exposed to 21% O2, 1.5% O2, or 1.5% O2 and reoxygenation (reox). Cells were fixed and direct fluorescence was visualized using confocal microscopy. Representative confocal images are shown.