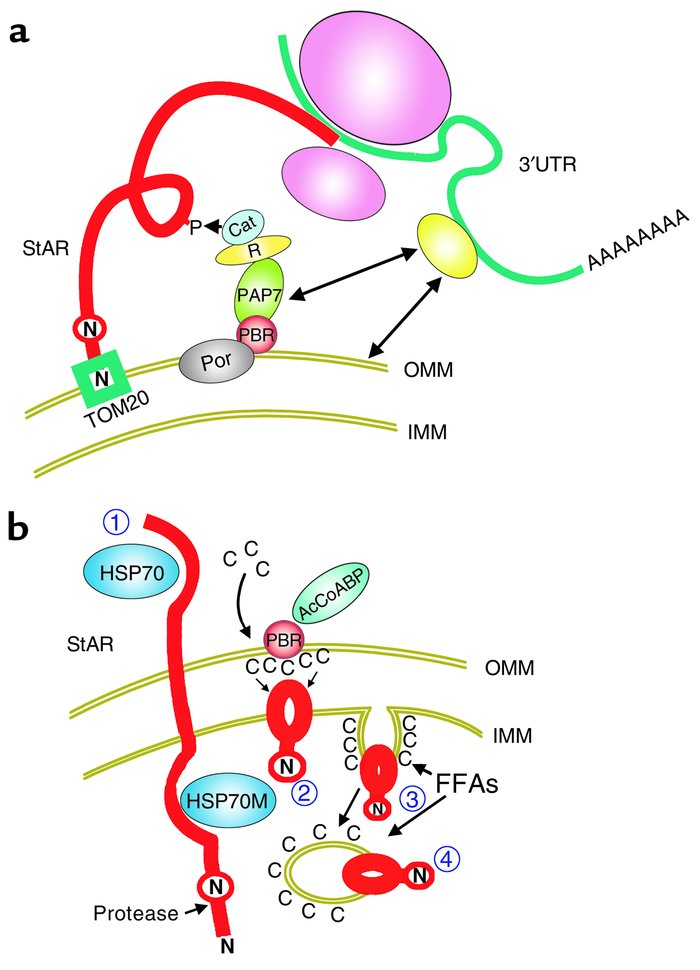 Models for StAR localization and cholesterol transfer into the mitochondrion. “N” indicates the amino-terminus of the cytoplasmic p37 form of StAR; the circled “N” indicates the amino-terminus of the processed mitochondrial form of StAR, pp30. () StAR localization. Newly synthesized p37, shown here being translated by a cytoplasmic ribosome, becomes associated through its N-terminal sequence with the OMM surface protein TOM20. Effective phosphorylation of p37 by the catalytic unit of PKA (Cat) is facilitated by interaction of the regulatory subunit (R) with the adapter protein PAP7. This protein, in turn, binds to the PBR in the OMM, a partner with porin (Por). Interactions between the StAR mRNA 3′-untranslated region (3′UTR) and OMM proteins may also help target nascent StAR to the mitochondrion. () Transfer of StAR to the inner mitochondrion and delivery of OMM cholesterol to cytochrome P450scc. In step 1, following interaction with TOM20, pp37is denatured with assistance from cytosolic HSP70 complex and then extruded across the OMM and IMM. This process requires the proton gradient across the IMM and the action of mitochondrial matrix HSP70 (HSP70M). A protease cleaves pp37 to pp30, which is then integrated into the IMM. In step 2, cholesterol (C) transfers to pp30 from outer membrane domains formed by PBR, which is activated by acyl-CoA–binding protein (AcCoABP). In step 3, activated membrane regions, which contain high levels of FFAs, accept the transfer of cholesterol from the OMM cholesterol-rich domains generated around PBR. AcCoABP may also participate in the transfer of acyl-CoA to the IMM, where mitochondrial thioesterase (MTE) hydrolyzes this compound to FFA. In step 4, pp30 facilitates the relocation of cholesterol to p450ssc, which is distributed throughout the highly extended IMM, and possibly separate matrix vesicles.