We studied the role of FGF-2 on regulation of neurogenesis and cell loss in the granule cell layer (GCL) of the hippocampal dentate gyrus after experimental traumatic brain injury (TBI). In both FGF-2–/– and FGF-2+/+ mice subjected to controlled cortical impact, the number of dividing cells labeled with BrdU, injected on posttrauma days 6 through 8, increased at 9 days after TBI, and the number of BrdU-positive cells colabeled with neuron-specific nuclear antigen significantly increased at 35 days. However, in injured FGF-2–/– mice, BrdU-positive cells and BrdU-positive neurons (days 9, 35) were fewer compared with FGF-2+/+ mice. There was also a decrease in the volume of the GCL and the number of GCL neurons after TBI in both FGF-2–/– and FGF-2+/+ mice, but the decrease in both was greater in FGF-2–/– mice at 35 days. Overexpression of FGF-2 by intracerebral injection of herpes simplex virus–1 amplicon vectors encoding this factor increased numbers of dividing cells (day 9) and BrdU-positive neurons (day 35) significantly in C57BL/6 mice. Furthermore, the decrease in GCL volume was also attenuated. These results suggest that FGF-2 upregulates neurogenesis and protects neurons against degeneration in the adult hippocampus after TBI, and that FGF-2 supplementation via gene transfer can reduce GCL degeneration after TBI. 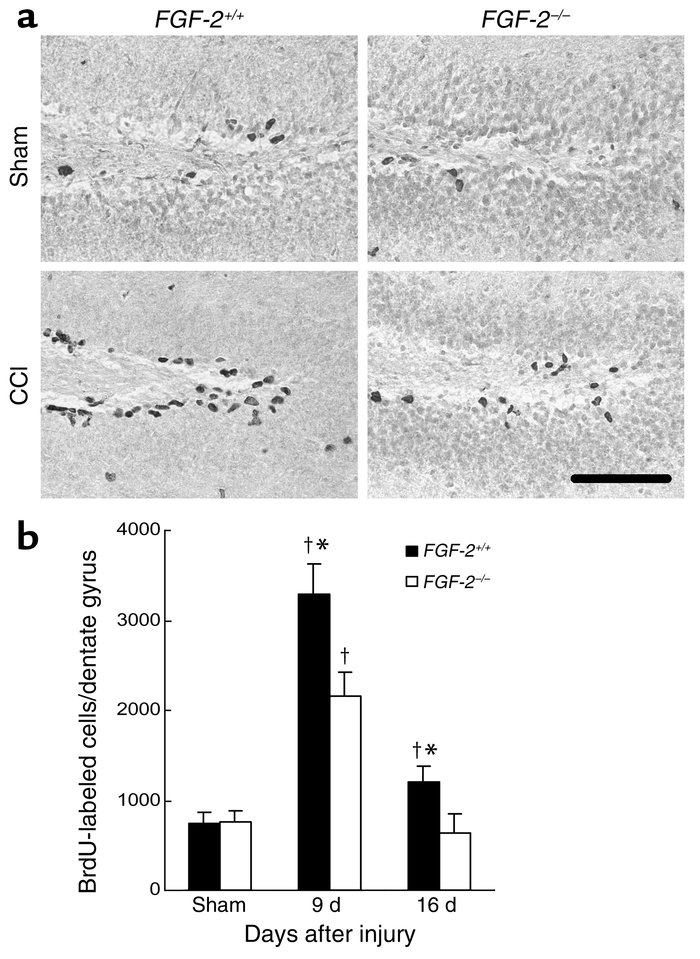 BrdU-positive cells in the SGZ of DG after CCI in and mice. () To label dividing cells, BrdU was injected intraperitoneally at 6, 7, and 8 days after CCI or sham operation, and mice were killed on day 9. BrdU labeling was detected by immunohistochemistry (see Methods). Few BrdU-labeled cells were present within the SGZ of the ipsilateral DG in the sham-operated and mice. After CCI, an increase in the number of positive cells was detected, but the increase was less in mice. Tissue section coordinate, bregma –1.9 mm. Scale bar: 100 μm. () Quantification of BrdU-positive cells in DG after CCI in and mice. BrdU was injected at 6, 7, and 8 days, or 13, 14, and 15 days after CCI, and animals killed on day 9 or 16, respectively. Sham-operated mice were injected with BrdU on days 6, 7, and 8, and killed on day 9. Cell proliferation was assessed by immunohistochemical detection of incorporated BrdU, and the positive cells were counted at four different levels of DG using stereologic methods. Data are expressed as the total number of labeled cells within SGZ (see Methods). After TBI, the number of BrdU-positive cells increased at 9 and 16 days in mice (black bars), whereas the increase in (white bars) was present only at 9 days after injury. † < 0.05 compared with sham-operated mice; * < 0.05, vs. . = 4–6 per group.