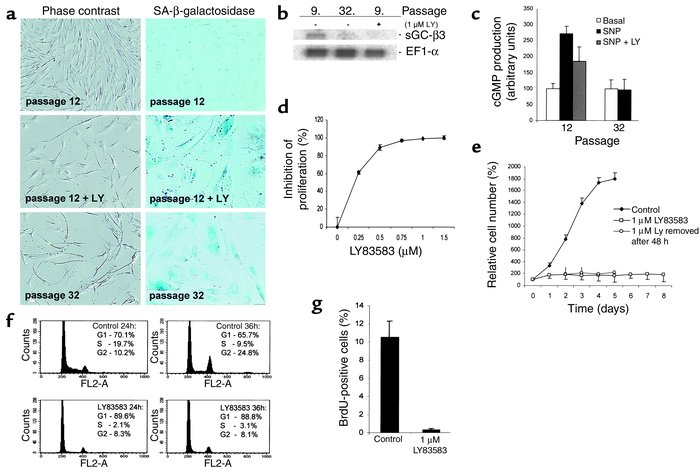 Modulation of the cGMP pathway in HDFs and effects of LY. () Shown is a comparison of HDFs after reaching replicative senescence with HDFs after LY treatment. The left panel shows morphology (magnification, ×100) and the right panel shows detection of SA-β-gal at pH 6 (magnification, ×200) using phase-contrast microscopy. () Northern blot analysis of expression in HDFs. Total RNA was isolated from early- (“9.”) and late-passage (“32.”) HDFs and HDFs (“9. passage”) treated with 1 μM LY for 4 days; 2.5 μg of total RNA was loaded per lane. and, as a control, mRNA were detected with 32P-labeled probes. () Response of early-passage and senescent HDFs to activation of cGMP synthesis. Cells were treated with 100 μM SNP for 2 hours in the absence or presence of LY. cGMP levels were determined as described in the Methods. Treatments were performed in triplicates and measured twice. () Inhibition of proliferation by LY. Subconfluent HDFs were treated with the indicated concentrations of LY for 3 days. Cell numbers were determined in triplicates. () Irreversible effect of LY on proliferation of HDFs. Cells were treated with 1 μM LY for the indicated periods. After trypsinization, cell numbers were determined in triplicates. () FACS analysis of HDFs treated with LY. HDFs were synchronized by confluence and released by trypsinization. After 24 and 36 hours of incubation in media containing 1 μM LY or vehicle, cells were collected for FACS analysis. For details, see the Methods. () Rate of DNA synthesis after LY treatment. BrdU incorporation was determined after incubation of HDFs in 10 μM BrdU for 6 hours. For details, see the Methods.