Enteroviral infections of the heart are among the most commonly identified causes of acute myocarditis in children and adults and have been implicated in dilated cardiomyopathy. Although there is considerable information regarding the cellular immune response in myocarditis, little is known about innate signaling mechanisms within the infected cardiac myocyte that contribute to the host defense against viral infection. Here we show the essential role of Janus kinase (JAK) signaling in cardiac myocyte antiviral defense and a negative role of an intrinsic JAK inhibitor, the suppressor of cytokine signaling (SOCS), in the early disease process. Cardiac myocyte–specific transgenic expression of SOCS1 inhibited enterovirus-induced signaling of JAK and the signal transducers and activators of transcription (STAT), with accompanying increases in viral replication, cardiomyopathy, and mortality in coxsackievirus-infected mice. Furthermore, the inhibition of SOCS in the cardiac myocyte through adeno-associated virus–mediated (AAV-mediated) expression of a dominant-negative SOCS1 increased the myocyte resistance to the acute cardiac injury caused by enteroviral infection. These results indicate that strategies directed at inhibition of SOCS in the heart and perhaps other organs can augment the host-cell antiviral system, thus preventing viral-mediated end-organ damage during the early stages of infection. 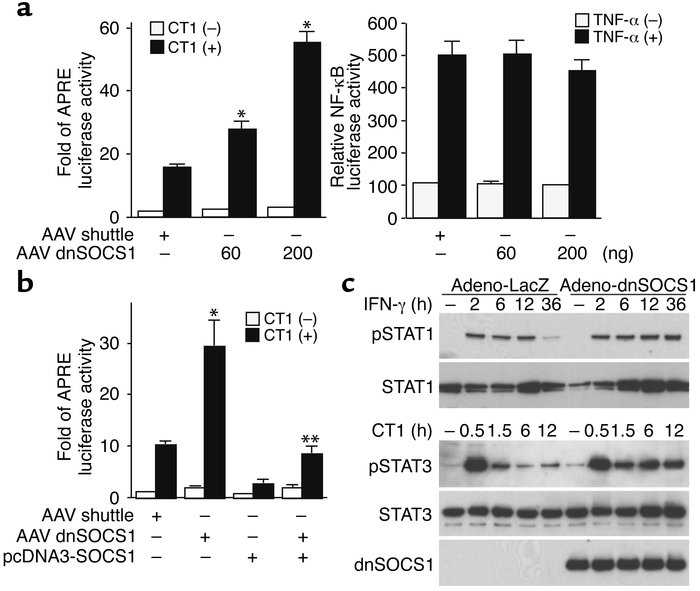 Augmentation of the JAK/STAT pathway by dnSOCS1 in cardiac myocytes. ( and ) Cardiomyocytes were transfected with a plasmid mixture containing the APRE-luciferase reporter gene (200 ng), the NF-κB–luciferase reporter gene (200 ng), the β-galactosidase gene (100 ng), the AAV shuttle plasmid, or the indicated concentrations of dnSOCS1 plasmid. After transfection, cells were incubated in the presence or absence of 1 nM CT-1 or 20 ng/ml TNF-α for 6 hours, and cell extracts were prepared. Data normalized with the β-galactosidase activity are shown. The experiments were repeated three times. Results are expressed as means ± SD. * < 0.01 for the comparison of CT-1 with the AAV shuttle. ** < 0.01 for the comparison of CT-1 with pcDNA3-SOCS1. () Time course of IFN-γ–induced STAT1 activation and CT-1–induced STAT3 activation in cardiac myocytes. Myocytes were treated with adenovirus LacZ or adenovirus dnSOCS1, were serum depleted for 24 hours, and were then stimulated with 1000 ng/ml IFN-γ or 1 nM CT-1 for the indicated period, respectively. Total cell extracts were prepared and blotted with phospho-STAT1, STAT1, phospho-STAT3, and STAT3 antibodies. The dnSOCS1 expression was confirmed with an anti-Myc antibody. Data from one experiment are presented; two additional experiments yielded comparable results. P-STAT1, phospho-STAT1; P-STAT3, phospho-STAT3; APRE, acute-phase response element.