Azathioprine and its metabolite 6-mercaptopurine (6-MP) are immunosuppressive drugs that are used in organ transplantation and autoimmune and chronic inflammatory diseases such as Crohn disease. However, their molecular mechanism of action is unknown. In the present study, we have identified a unique and unexpected role for azathioprine and its metabolites in the control of T cell apoptosis by modulation of Rac1 activation upon CD28 costimulation. We found that azathioprine and its metabolites induced apoptosis of T cells from patients with Crohn disease and control patients. Apoptosis induction required costimulation with CD28 and was mediated by specific blockade of Rac1 activation through binding of azathioprine-generated 6-thioguanine triphosphate (6-Thio-GTP) to Rac1 instead of GTP. The activation of Rac1 target genes such as mitogen-activated protein kinase kinase (MEK), NF-κB, and bcl-xL was suppressed by azathioprine, leading to a mitochondrial pathway of apoptosis. Azathioprine thus converts a costimulatory signal into an apoptotic signal by modulating Rac1 activity. These findings explain the immunosuppressive effects of azathioprine and suggest that 6-Thio-GTP derivates may be useful as potent immunosuppressive agents in autoimmune diseases and organ transplantation. 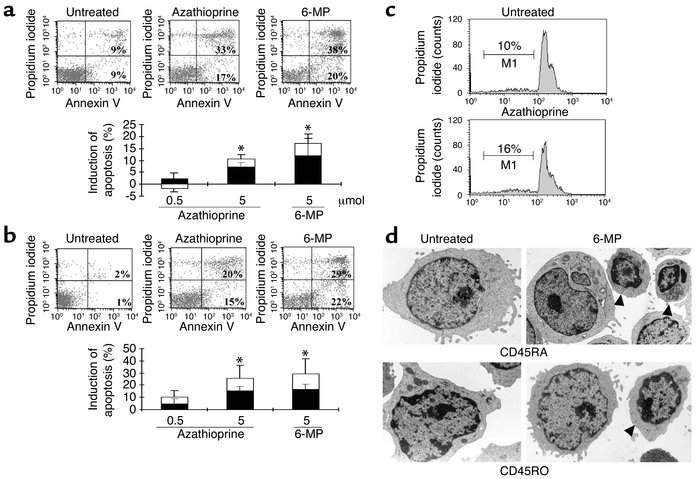