The gastric oxyntic glands are maintained by gastric stem cells that continuously supply all differentiated cell types within the corpus epithelium. Stem cells are supported by stromal cells that make up the stem cell niche. In this issue of the JCI, Fischer et al. report on their use of genetically engineered mouse models and organoids to study the role of R-spondin 3 (RSPO3) in the stomach. RSPO3, one of the major stem cell niche factors, primarily promoted secretory differentiation in the normal stomach, but also contributed to regeneration following injury. Mechanistically, RSPO3 was upregulated in the stroma by loss of chief cells and then activated the YAP pathway in gastric stem and progenitor cells, which appeared to be critical for regeneration of the secretory lineage. These data substantially advance our understanding of the regulation of gastric stem cells and highlight a function for RSPO3 in the gastrointestinal tract, which is as the gatekeeper of secretory differentiation. 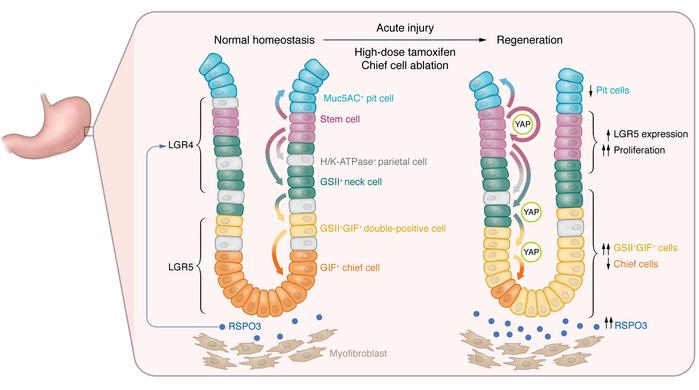