Adipose tissue lipolysis supplies circulating FFAs, which largely meet lipid fuel needs; however, excess FFAs, can contribute to the adverse health consequences of obesity. Because “normal” FFA release has not been well defined, average (mean of 4 days) basal FFA release and its potential regulation factors were measured in 50 lean and obese adults (25 women). Resting energy expenditure (REE), but not body composition, predicted most of the interindividual variation in FFA release. There was a significant, positive linear relationship between palmitate release and REE; however, women released approximately 40% more FFA than men relative to REE. Neither plasma palmitate concentrations nor respiratory quotient by indirect calorimetry differed between men and women. Glucose release rates were not different in men and women whether related to REE or fat free mass. These findings indicate that nonoxidative FFA clearance is greater in women than in men. This could be an advantage at times of increased fuel needs. We conclude that “normal” adipose tissue lipolysis is different in men and women and that the fuel export role of adipose tissue in obesity will need to be reassessed. 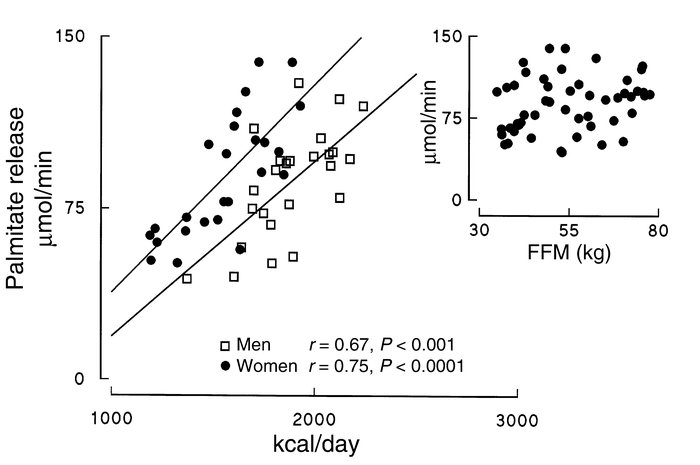 Resting postabsorptive palmitate release rate is plotted vs. REE for the men and women participating in the study. The inset depicts the relationship between palmitate release and FFM for these same volunteers.