Nonmelanoma skin cancer is one of the most common malignancies in humans. Different therapeutic strategies for the treatment of these tumors are currently being investigated. Given the growth-inhibiting effects of cannabinoids on gliomas and the wide tissue distribution of the two subtypes of cannabinoid receptors (CB1 and CB2), we studied the potential utility of these compounds in anti–skin tumor therapy. Here we show that the CB1 and the CB2 receptor are expressed in normal skin and skin tumors of mice and humans. In cell culture experiments pharmacological activation of cannabinoid receptors induced the apoptotic death of tumorigenic epidermal cells, whereas the viability of nontransformed epidermal cells remained unaffected. Local administration of the mixed CB1/CB2 agonist WIN-55,212-2 or the selective CB2 agonist JWH-133 induced a considerable growth inhibition of malignant tumors generated by inoculation of epidermal tumor cells into nude mice. Cannabinoid-treated tumors showed an increased number of apoptotic cells. This was accompanied by impairment of tumor vascularization, as determined by altered blood vessel morphology and decreased expression of proangiogenic factors (VEGF, placental growth factor, and angiopoietin 2). Abrogation of EGF-R function was also observed in cannabinoid-treated tumors. These results support a new therapeutic approach for the treatment of skin tumors. 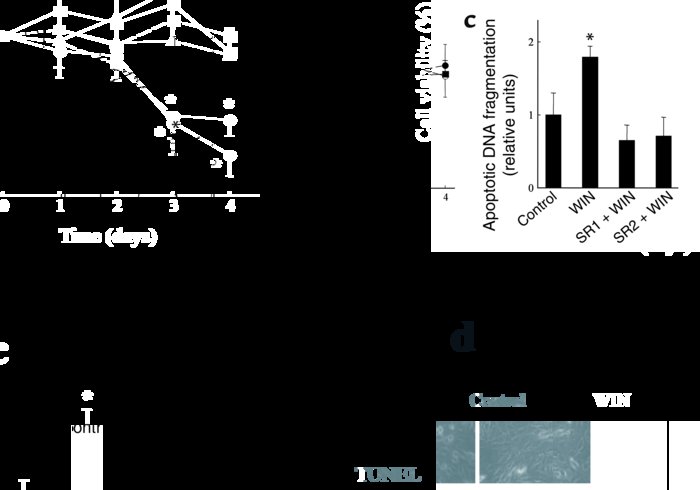