Fibrodysplasia ossificans progressiva (FOP) is an ultrarare, debilitating disease in which heterotopic bone is formed in certain soft tissues. A gain-of-function variant in the cytoplasmic domain of the activin A receptor type I (ACVR1) exists in all patients with FOP. Strikingly, these FOP-causing variants imbue a neofunction to ACVR1 — the ability to recognize activin A as an agonist with bone morphogenic protein–like signaling that leads to heterotopic ossification (HO). These findings are supported by the efficacy of anti–activin A antibodies in preventing HO in FOP mice. This surprising story continues in companion papers in this issue of the JCI. Aykul et al. and Lees-Shepard et al. independently found that antibodies against ACVR1, which were being developed as potential therapeutics for FOP, instead caused HO in FOP mice. While this unexpected finding may be the clinical final act for such antibodies, it provides another twist in the unique and evolving FOP story.

Signaling events and outcomes in WT and R206H ACVR1. 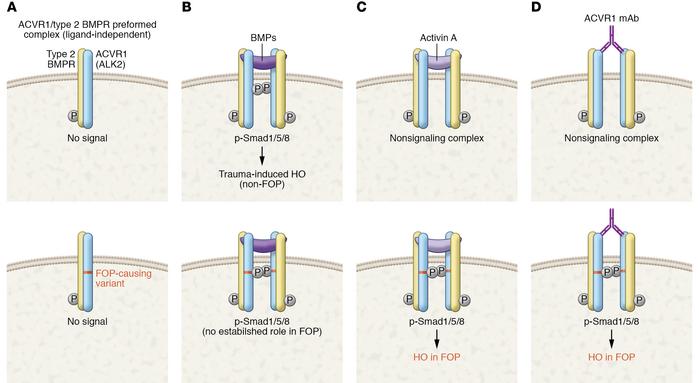 () Heterodimers of ACVR1 (WT or FOP-mutant) and phosphorylated type 2 BMP receptors exist on the membrane in the absence of ligand in preformed heterocomplexes that do not signal (, ). () The binding of BMPs promote heterodimerization of these preformed complexes (WT or FOP-mutant) and result in heterotetramers that lead to the phosphorylation of Smad1/5/8. While there is evidence that WT ACVR1 and type 2 BMP receptor heterotetramers participate in trauma-induced heterotopic ossification (HO), in non-FOP settings (), there is no evidence that BMP-driven heterotetramers involving FOP-mutant ACVR1 participate in HO in FOP. () When heterotetramers of WT ACVR1 and corresponding type 2 BMP receptors are formed by activin A binding, a nonsignaling complex results (). In contrast, a stoichiometrically identical complex formed with FOP-mutant ACVR1 induces phosphorylation of Smad1/5/8 and drives HO in FOP (). () Aykul, Huang, et al. () found that monoclonal antibodies (mAbs) directed against the extracellular domain of ACVR1, which is the same in WT and FOP ACVR1, led to dimerization and phosphorylation of FOP ACVR1 and the formation of ACVR1/type 2 BMP receptor heterotetramers that were stoichiometrically identical to those formed by ligands (). With WT ACVR1, the anti-ACVR1/type 2 BMP receptor complexes did not signal, effectively mirroring the nonsignaling complex. However, as independently demonstrated by Aykul, Huang, et al. and Lees-Shepard, Stoessel, et al., the FOP-mutant ACVR1/type 2 BMP heterotetramers resulted in complexes that induced phosphorylation of Smad1/5/8 and drove HO in FOP, much like activin A (, ). However, antibody binding alone was insufficient to drive HO in FOP. As in activin A–mediated HO, some, as yet to be identified, factor or signal, probably injury and/or inflammation mediated, is needed to drive HO.