A pathogenic hallmark of rheumatoid arthritis (RA) is persistent activation of self-reactive CD4+ T cells. The cause of this aberrant activity remains elusive. We report here detection of autoantibodies against B7-H1, a recently described member of the B7 family, in 29% of patients with RA versus 4% of healthy donors. High-level expression of cell surface B7-H1 are found on activated human CD4+, CD8+, and CD45RO+ T cells. Immobilized autoantibodies to B7-H1 are capable of costimulating the proliferation of CD4+ T cells in vitro, and the presence of these autoantibodies correlates with active disease status. Using immobilized B7-H1 mAb’s and programmed death 1Ig, we demonstrate that engagement of B7-H1 on CD4+ T cells costimulates proliferation and secretion of IL-10, and subsequently leads to programmed cell death, accompanied with upregulated expression of TNF-related apoptosis–inducing ligand and activation of caspase-3. Taken together with our previous findings, these data indicate a bidirectional signaling role of B7-H1 in T cell costimulation and apoptosis and implicate B7-H1 autoantibodies as contributing to the progression of RA by inducing aberrant T cell responses. 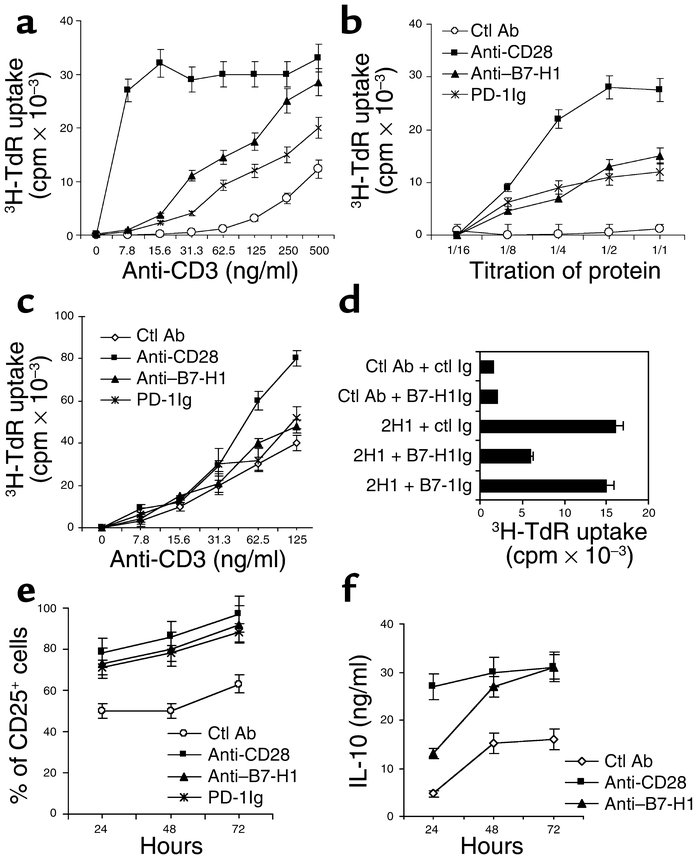