Lipoprotein lipase (LPL) is thought to be the only enzyme responsible for the catabolism of triglycerides (TGs) associated with TG-rich lipoproteins in adipose tissue (AT). However, LPL deficiency in humans and induced mutant mice is not associated with decreased fat mass. We investigated whether endothelial lipase (EL), a recently discovered phospholipase, might represent an alternative mechanism for the uptake of phospholipid-derived fatty acids in murine lipoprotein-deficient AT. When LPL was expressed in AT and isolated murine adipocytes, EL mRNA was not detectable. In contrast, mouse AT and isolated adipocytes that lacked LPL expressed large amounts of EL mRNA. The cellular phospholipase activity in LPL-deficient fat pads was increased 4-fold compared with control fat pads and could be inhibited to control levels by a specific EL antibody. Fatty acids produced by EL activity were absorbed by adipocytes and incorporated into the TG moiety of AT. Our results suggest that EL activity in AT and other peripheral tissues might contribute to the tissue uptake of free fatty acids, which could have important implications for the metabolism of plasma lipoproteins. 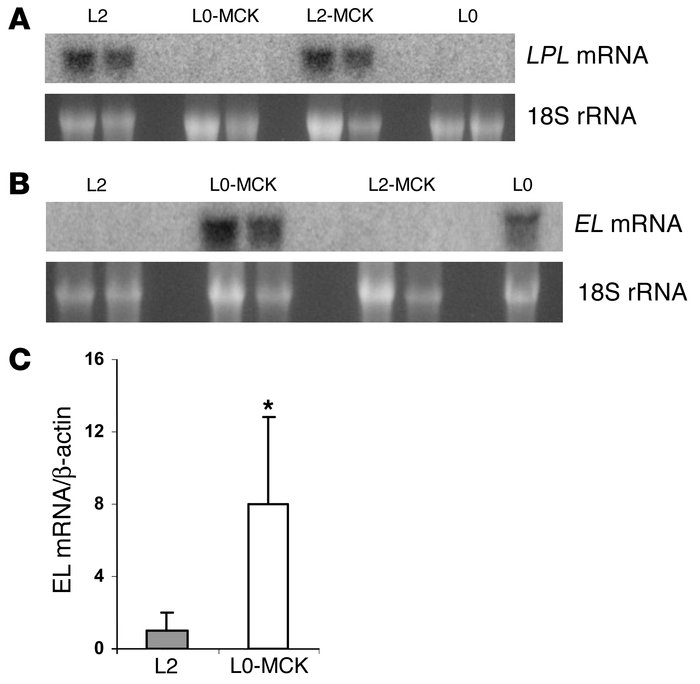 Murine and mRNA expression in adipose tissue. Relative abundance of () and () mRNA in AT of mice expressing (, ) or lacking (, ) in AT. Total RNA was isolated from murine AT in the absence or presence of LPL and subjected to Northern blot analysis. Ten micrograms of total RNA were separated on a formaldehyde/agarose gel, blotted onto a nylon membrane, and hybridized with a murine-specific [32P]-labeled cDNA probe. rRNA, ribosomal RNA. () mRNA concentrations in AT were confirmed by fluorescent real-time PCR (see Methods). mRNA quantities were normalized to those of β-actin. Data are expressed as the mean values of 3 experiments performed in duplicates relative to the expression of mRNA in control mice (L2). Bars represent mean ± SD of the hybridization intensity signals. * < 0.05.