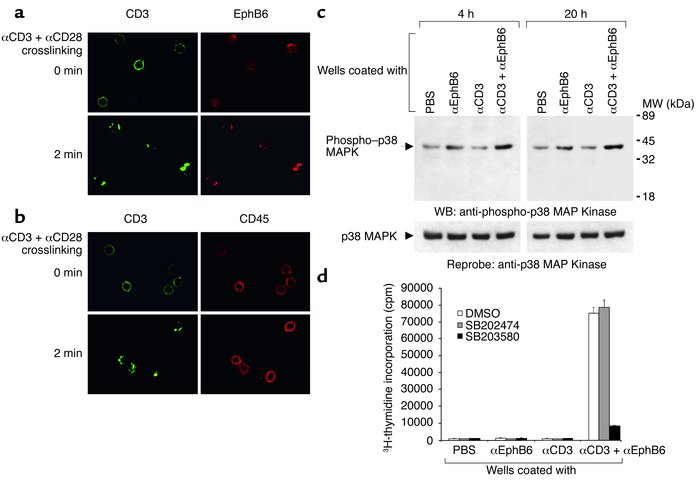 EphB6 signaling. () Rapid colocalization of EphB6 with TCR caps after anti-CD3 and anti-CD28 crosslinking. All experiments were conducted more than three times and were reproducible. Representative results are shown. MACS-purified T cells were cultured for 48 hours in medium and then incubated with Alexa Fluor 488–labeled anti-CD3 mAb and anti-CD28 mAb on ice for 40 minutes, followed by rabbit anti-mouse IgG crosslinking at 37°C for 2 minutes. Cells were immediately fixed with 4% paraformaldehyde and stained with biotinylated anti-EphB6 mAb followed by Alexa Fluor 594–conjugated streptavidin. The cells were then examined by confocal microscopy for CD3 (green) and EphB6 (red) localization. () CD45 does not translocate to TCR caps after anti-CD3 and anti-CD28 crosslinking. The cells were crosslinked and stained as in Figure a, except that biotinylated anti-CD45 mAb was used in place of biotinylated anti-EphB6 mAb. () Immunoblotting of p38 MAPK and tyrosine phosphorylated p38 MAPK (phospho–p38 MAPK). MACS-purified T cells were added to wells coated with anti-EphB6 (4 μg/ml) and/or anti-CD3 (0.2 μg/ml). The cells were harvested after 4 hours or 20 hours, as indicated, and analyzed by immunoblotting. Signals of p38 MAPK and phospho–p38 MAPK on the same membrane are indicated by arrows. () Effects of the p38 MAPK–specific inhibitor on EphB6-enhanced T cell proliferation. MACS-purified T cells were preincubated for 1 hour in complete culture medium containing the p38 MAPK–specific inhibitor SB203580 (10 μM), its nonfunctional structural analogue SB202474 (10 μM), or vehicle (DMSO; 0.1%). The cells were then transferred to wells coated with the anti-EphB6 mAb 4F12 (4 μg/ml), the anti-CD3 mAb OKT3 (0.2 μg/ml), or both, and cultured for 72 hours. 3H-thymidine was added to the culture for the last 8 hours, and thymidine uptake by the cells was measured. MW, molecular weight; WB, Western blot.