Hyperinsulinemia, glucose intolerance, and dyslipidemia induced by acute inhibition of phosphoinositide 3-kinase signaling in the liver

Hyperinsulinemia, glucose intolerance, and dyslipidemia induced by acute inhibition of phosphoinositide 3-kinase signaling in the liver 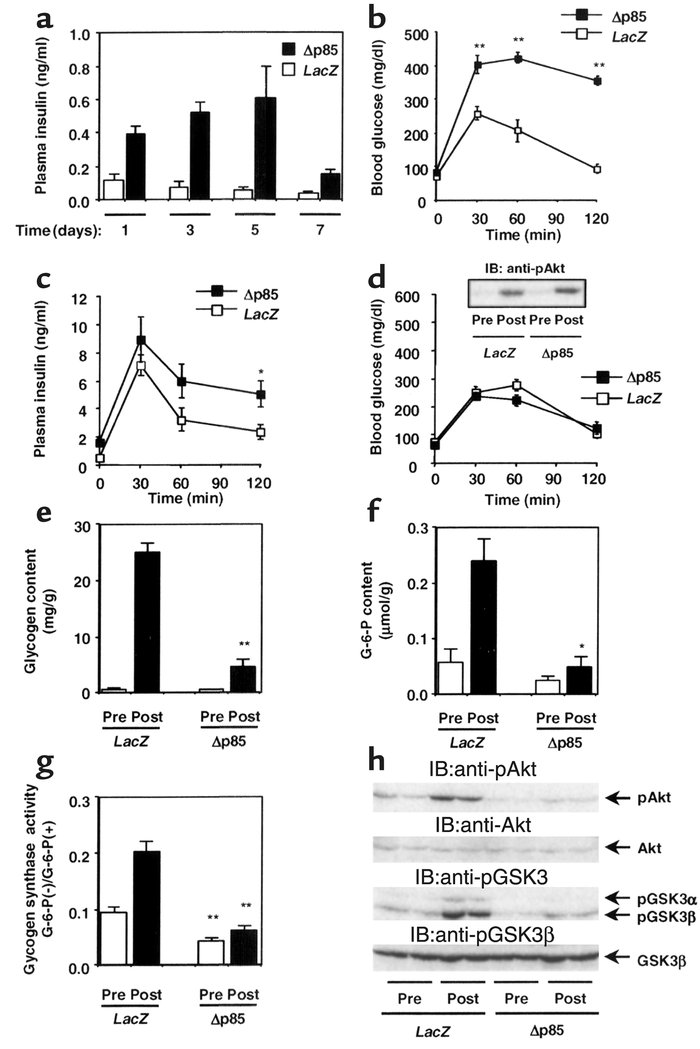 Time course of plasma insulin concentration in DNPI3K and mice, as well as the effects of Δp85 expression in the liver on responses to oral glucose intake. () Plasma insulin concentration was measured at the indicated times after adenovirus injection and food deprivation for 16 hours. (–) DNPI3K and mice were deprived of food for 16 hours and then loaded orally with glucose (2 g/kg) at 3 (, , and –) or 11 () days after the adenovirus injection. Blood glucose () and plasma insulin () concentrations were determined at the indicated times after glucose intake. Glycogen () and glucose 6-phosphate () contents, glycogen synthase activity (), and phosphorylation of Akt (, inset; and ) and of GSK3 () in the liver were assayed before (Pre) and 120 minutes after (Post) glucose load. Glycogen and glucose 6-phosphate (G-6-P) contents are expressed per gram of liver mass. Glycogen synthase activity is expressed as the ratio of values determined in the absence of glucose 6-phosphate to values determined in the presence of glucose 6-phosphate. Data are means ± SEM of values from three (), ten (), four (, and ), five () or six () mice, or are shown for two mice and representative of six mice () or shown for one mouse and representative of five mice (, inset). * < 0.05, ** < 0.01 compared with the corresponding value for mice.