Th2 cells are generated from naive CD4 T cells upon T cell receptor (TCR) recognition of antigen and IL-4 stimulation and play crucial roles in humoral immunity against infectious microorganisms and the pathogenesis of allergic and autoimmune diseases. A tyrosine phosphatase, SHP-1, that contains src homology 2 (SH2) domains is recognized as a negative regulator for various intracellular signaling molecules, including those downstream of the TCR and the IL-4 receptor. Here we assessed the role of SHP-1 in Th1/Th2 cell differentiation and in the development of Th2-dependent allergic airway inflammation by using a natural SHP-1 mutant, the motheaten mouse. CD4 T cells appear to develop normally in the heterozygous motheaten (me/+) thymus even though they express decreased amounts of SHP-1 (about one-third the level of wild-type thymus). The me/+ naive splenic CD4 T cells showed enhanced activation by IL-4 receptor–mediated signaling but only marginal enhancement of TCR-mediated signaling. Interestingly, the generation of Th2 cells was increased and specific cytokine production of mast cells was enhanced in me/+ mice. In an OVA-induced allergic airway inflammation model, eosinophilic inflammation, mucus hyperproduction, and airway hyperresponsiveness were enhanced in me/+ mice. Thus, SHP-1 may have a role as a negative regulator in the development of allergic responses, such as allergic asthma. 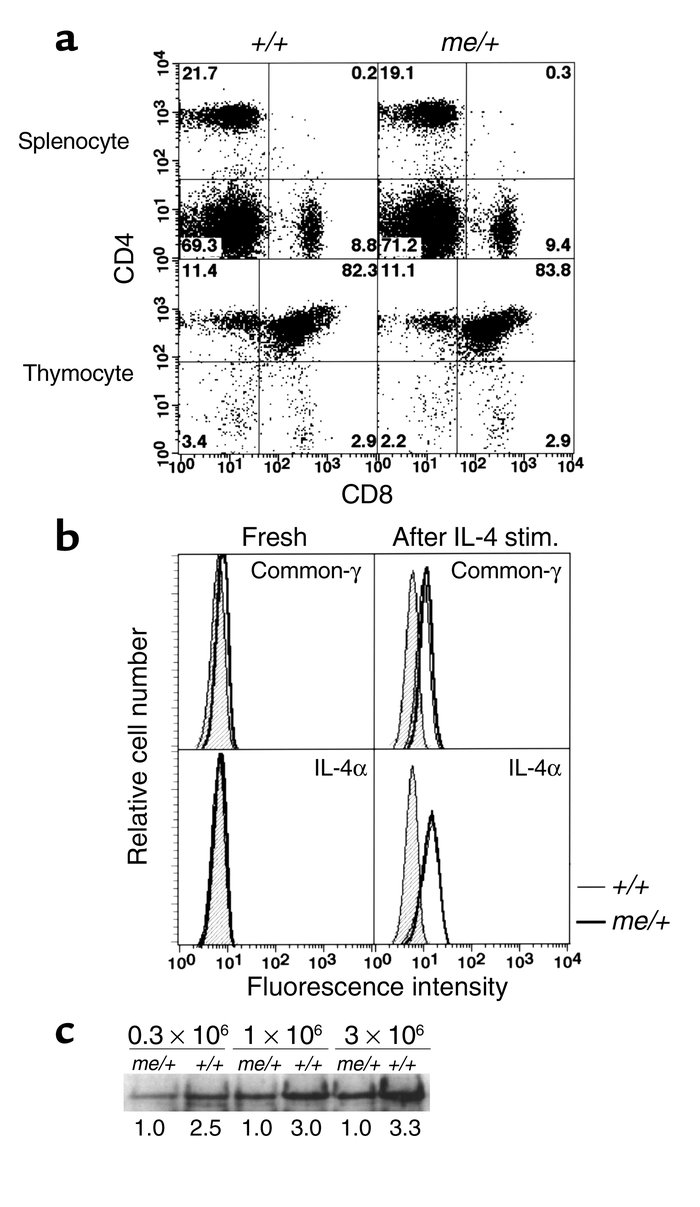 Phenotypically normal naive CD4 T cells developed in mice. () Representative CD4/CD8 profiles of splenocytes and thymocytes of wild-type () and heterozygous () mice with the mutation. The percentages of cells in each quadrant are shown. The numbers of cells harvested (yield) were 1.41 × 108 splenocytes in wild-type, 1.52 × 108 splenocytes in , 1.72 × 108 thymocytes in wild-type, and 1.70 × 108 thymocytes in . () Splenic CD4 T cells from wild-type and mice were cultured with IL-4 (100 U/ml) for 24 hours, and the expression of common-γ and IL-4Rα chain was assessed. Background staining is shown as hatched areas. () SHP-1 protein expression in splenic CD4 T cells from and wild-type mice. Immunoprecipitation and immunoblotting with anti–SHP-1 mAb were performed. Ratios of the intensities of the SHP-1 bands are shown.