The role of 15 lipoxygenase 1 in asthma comes into focus

The role of 15 lipoxygenase 1 in asthma comes into focus

IL-4– and IL-13–driven epithelial cell expression of 15 lipoxygenase 1 (15LO1) is a consistent feature of eosinophil-dominated asthma known as type 2–high (T2-high) asthma. The abundant soluble products of arachidonic acid (AA) metabolized by 15LO1 reflect a high level of enzymatic activity in asthma and chronic rhinosinusitis. However, the precise role of 15LO1 and its products in disease pathogenesis remains enigmatic. In this issue of the JCI, Nagasaki and colleagues demonstrate a role for 15LO1 in controlling redox balance and epithelial homeostasis in T2-high asthma by metabolizing AA that is esterified to membrane phospholipids. The findings may pave the way toward the development of 15LO1 inhibitors as asthma treatments.

Model for dual role of 15LO1 in asthma related to type 2 inflammation. 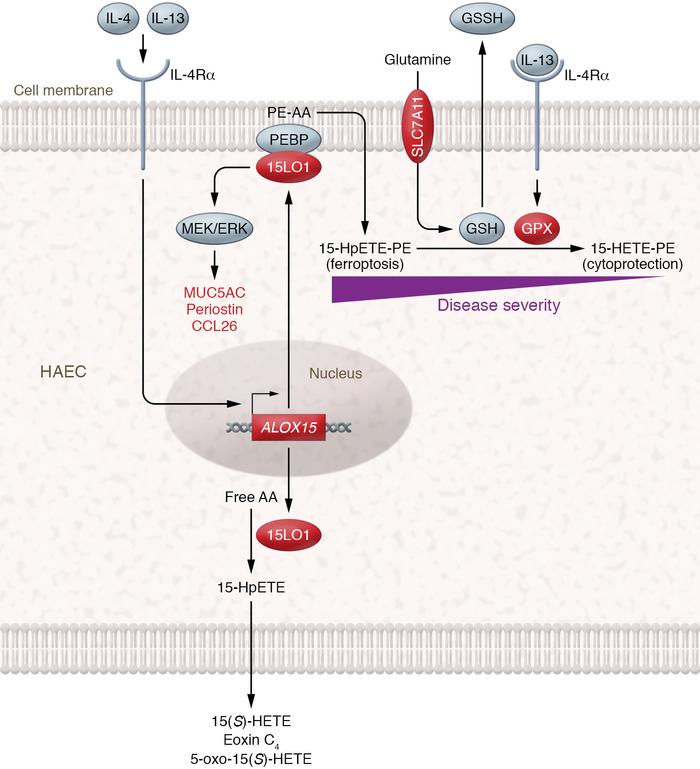 IL-4 and IL-13 induce IL-4Rα–dependent signaling to drive (15LO1) expression in human airway epithelial cells (HAECs). 15LO1 can add molecular oxygen to free AA, forming HpETE that is rapidly reduced to 15()-HETE, which in turn can be converted into 5-oxo-15()-HETE, eoxin C4, and other detectable mediators found in biological fluids. 15LO1 also associates with PEBP in the cell membrane, activating ERK (leading to potentiated expression of additional type 2 inflammatory proteins) and switching the 15LO1 substrate preference to PE-esterified AA. The resultant HpETE-PE triggers ferroptosis unless it is reduced by GPX. This reduction requires GSH, which is maintained by the glutamic acid transporter protein SLC7A11. IL-13 increases both GPX and SLC7A11 expression, suggesting that a coordinated system maintains cellular redox balance. Perturbations in this system, such as diminished GSH availability, may favor ferroptosis over cytoprotection, leading to epithelial damage. Red color indicates proteins that are upregulated in epithelial cells by IL-4 and IL-13.